Growing up playing in the AYSO in Northern California, we had a plethora of brilliant team names – Stingers (my personal favorite), Golden Stars, Black Beauties and the Devils. After graduating to the CYSA in middle school, I would be apart of the California Northstars until I graduated high school. We were not from a big, traditional club, but soon after our eclectic group of passionate, young girls came together on the field, we started our own traditions. Driving to San Diego, Fresno or Sacramento, our brigade was full of dedicated coaches, supportive families and always a few friends along the way. Being from so many different backgrounds, our team somehow gelled together as one and we were inseparable on and off the field. It is always such an amazing feeling to look back and be able to say I played with all of my best friends,

Half way through senior year I was able to relax when other students were worrying about college. I earned a soccer scholarship to San Jose State University (SJSU), where I also had the privilege and pleasure to play with one of my best friends, who I played with during club and high school ball. SJSU was exciting, fun and a step in the right direction; however, not at all what I had expected from a NCAA Division 1 soccer team.

After healing from an ACL tear in 2008 and finishing my NCAA career at CSUEB, I moved onto semi-professional soccer in the WPSL with the San Francisco Nighthawks and the California Storm. Playing alongside Yang Zhou, Sissi and Brandi Chastain during those years was a dream come true. I still remember the first time Sissi called out the command, “give Jack the ball!” I was in a full sprint to get open for a pass in a game at UC Davis. My legs kept sprinting, but my mind went blank as I heard my name come out of her mouth.

The next step in my career was playing for the Puerto Rico National team. I will never forget wearing the red, white and blue colors (thankfully representing both of my Puerto Rican and American heritages), the feeling of walking out to the FIFA anthem and achieving yet one more dream. Later blogs will tell the roller coaster ride of a few stories of training camps and games in Puerto Rico, but for now, I will leave it as an enriching experience that brought me to the next level in my soccer career.

Being my first experience in Germany, BV Cloppenburg will be unforgettable. Meeting great friends and townspeople, traveling around western Europe and discovering who I really am will be a priceless experience. In a town of 27,000 people, there were many hidden treasures that surprised me. Going around the entire city took only 20 minutes by car, but the flare of the people of that small town was unforgettable.

Everyone knew each other and recognized our group of 4 American soccer players as ate our way through the delicious bakeries. The best part was getting extra whip cream for our hot chocolates and extra sauce for our schnitzels! The worst thing is running out of lemon juice or mushroom cream sauce for your schnitzel or not having whip cream with those last few sips of hot chocolate in 30 degree weather! It literally pays to be genuine and truly want to befriend the townspeople.

Going into my fourth season in Germany, I decided to continue to play for Magdeburg FFC in the 2nd division while I pursued my MBA from Arizona State

University. Waking up twice a week in the middle of the night in order to participate in Google Hangouts for projects and competing to the best of my ability everyday in training and games was a test of character, discipline and will.

Now into my fifth year in Germany, I finally am where I want to be – playing for FF USV Jena in the 1st Division. I knew working toward this goal would be extremely mentally and physically tough considering it was the highest level of soccer in the world and unknown territory; however, knowing that I could reach this goal in my soccer career helped me finish those 60-minute hill runs, P90X leg days and 3-minute plank workouts.

I hope you find my story of hardship and success, trial and error, and rain and sunshine something to relate to and reflect on. How long have you been playing? When did you face your hardest obstacle? 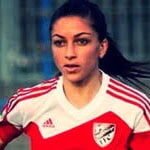 Jackie is a 28-year-old California native living in Erfurt, Germany, and currently playing for FF USV Jena in the 1st Bundesliga. She recently earned her MBA at Arizona State University and studying for her German fluency certificate. An inspiration to young players, she aims to provide solutions for young, high school, club, college and amateur players who want to further their careers in Germany, Europe or other cities abroad. Explore and discover more at KicksAndChronicles.com.
PrevPreviousDealing with Coaches and Spectators
NextMy Tribute to Alan MaherNext