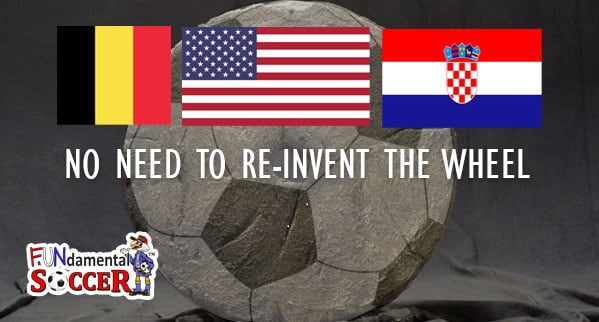 Youth soccer development programs in Belgium, Croatia, and the USA have many things in common. Here is a breakdown of how coach-educators from each country use similar tools – tools that have led to success.

Belgium — One of the main principles is that the main actor is the player, not the coach, not the team.

Croatia – They will know how to shoot, play one-touch, and dribble. But choices are left to them.

FUNdamental SOCCER – Create an environment that forces the players to make decisions and learn on their own. Create an atmosphere where the players are allowed to teach themselves.

Croatia – For decades now, games under the age of twelve have been small sides games at the schoolboy level.

Belgium — Create the environment, free them and help only if it’s necessary.

Croatia – There is never a focus solely on dribbling, passing, or anyone learning outcome; the focus has been on decision-making and the correct selection of skill set in each scenario.

FUNdamental SOCCER – Discipline your mind to focus on what is being taught and ignore all other mistakes. Avoid causing paralysis through analysis.

Belgium — Players must be in an environment of making decisions by themselves.

Croatia — Coaches have been encouraged for decades to encourage individuality so long as the decision-making has been correct.

FUNdamental SOCCER – (1999) The ‘9-Step Practice Routine’, a game-based practice, is introduced and published.

Belgium — We don’t have league tables until the Under-14 level.

Croatia – “Our boys do not play in real competitions until they are 12 or 13, and even then, the result is not everything. It’s not rocket science. People focused on results before developments are a curse on the future of the game

FUNdamental SOCCER– Motto – “The outcome of our children is infinitely more important than the outcome of any game they will ever play!”

Thank you for taking the time to read this article and sharing it with your soccer community. Your (Comments) on this subject are very much appreciated!