Two players are challenging for the ball during a youth game when one player falls to the ground.  What the parents of the down player “saw” was a foul, illegal play, and something that the referee should be whistling in their favor.  Conversely, the other player’s parents “saw” a legal and fair challenge and no reason for a whistle to be blown. Parents being naturally protective of their child tend to see what their child does as acceptable and what is being done to their child as unfair.

Unlike what players and parents see in training films, on television, during live contests, and the like, the youth game dynamics are much different from those at the older and professional levels.

At the lower levels of play, players start a learning process and begin to accustom themselves to the Laws of The Game of soccer.

As players grow older and gain more skills and experience, parents also increase their knowledge and better understand acceptable and fair play under The Laws.

At a young age, the players have little knowledge or understanding of what a foul is. Young players can often be seen falling even though no other player is around, or they may trip over their own feet or the ball.

As children grow older, their soccer skills improve, and they acquire more control over their bodies.  Since players improve and develop at different rates, the skill level within a game may vary significantly.  As players join new teams, they also find themselves with teammates with more or less experience.  This can cause problems as the more skilled and experienced players may dominate play and take advantage of the less experienced players.  Such situations will cause some players to work hard to stop these dominant players and may create challenging conditions for the officials trying to sort out fair from foul play.

The referees of these younger age groups are faced with several roles.   Their primary role is to enforce The Laws and keep players from hurting themselves, being hurt, or hurting others.  While trying to improve, some players may be misguided in attempting to emulate older, experienced players and maybe trying to perform feats that are more suitable and safely performed at a level beyond their skills.  This may lead to players unintentionally hurting themselves or others. 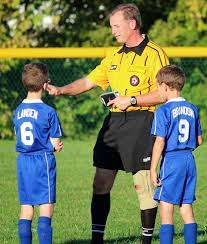 Another role of the youth official is to teach The Laws of the Game indirectly.  At the youngest levels of play, the referee may stop the game for a “careless” foul and elect to quickly explain to the player that what they did is not considered fair play.

Ultimately, referees are the guardians of the Laws of the Game.  They strive to balance the players’ enjoyable and safe experiences and keep the game flowing smoothly and fairly.