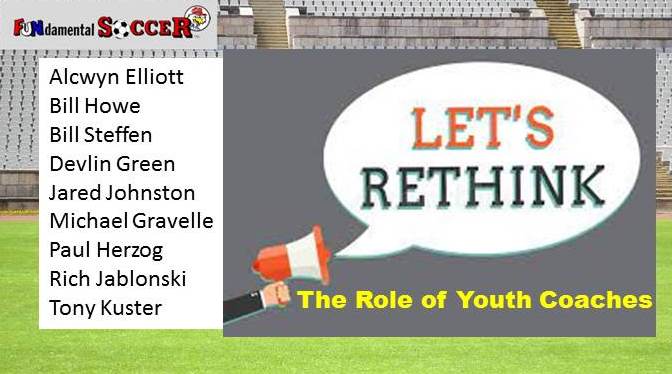 Why Aren’t Our Youngsters Doing It?

Here are just a few of the responses to my article ,  Reevaluating The Role of Youth Coaches!

This is a more significant question than it appears on the surface and lies at the foundations of our challenges.  Children do not do things on their own as we have set the environment up that way.  Children playing independently in small groups at the local fields are a rarity.

They are conditioned to respond to coaches’ instructions.  We are in a coach-dominated environment in N. America.  The exact opposite is true everywhere else.  I once asked a group of U12 girls what they were waiting for as I was setting up.  They replied, “We’re waiting for you, coach.” They were practicing for me!  I could see the 4 & 5-year-olds running all over with their balls down the field while the young coach was trying to organize them.  They needed no invitation.

When I first started a youth program for the club, I played in. I chose children who went to one of two schools in a neighborhood.  They knew each other and could walk to the schoolyard to scrimmage.  Today, they are drafted from distant neighborhoods.  That option doesn’t exist for them.  Parents must drive them to practice.  Mine just walked.  I conducted training at the same school.  Z. Zidane said, “All my success, I owe to playing with my friends on the street.”  Bill Howe

Pick-up is a must!  You can express yourself without reprimand. You can only dribble around so many cones.  My kids play all the time, and it has definitely improved their games.  Devlin Green

I love to see the older kids as the Young’uns coaches too.  Great article.  Jared Johnston

The premise of this piece appears to be that kids organize and play football on their own, but once there is a structured environment, they wait for instruction.  That’s not a surprise, and the author isn’t comparing two similar situations, irrespective of the country.

All my players who turn up to training are ready to grab a ball and start some sort of practice without instruction.  Usually just shooting at goal but sometimes more structured.  If I just told them to set up a game however, they wanted, I’m sure they would go without further direction, even if they were a bit puzzled at first.  These are u8s.  Michael Gravelle

I hear travel coaches at U8-U12 instructing kids all the time about their club’s system.  Yelling tactics, positions, etc., in a way that the players don’t understand, but it takes reactive, joyful playfully out of the equation.

If little Tommy or Susie are spending more time figuring out what “get wider, you’re playing the 6” means. Then they enjoy being on the field with their friends. We’re screwed as a soccer program.

If I could start over again as a coach, I would talk about zero game tactics until about 12 years old.  It would be all about learning to take a good first touch and put their laces through the ball with both feet.  Paul Herzog

Hi Karl, Good question, When I was a kid, football was my passion (Soccer) and I played on the street and played in school every break time with a tennis ball 11 on 11 in the schoolyard. I played every day of the week even played kicking a can around with friends.  Today’s kids have so many diversions such as phones and other home electronics to pre-occupy themselves.  And, of course, the cost is the additional significant deterrent.

Paul – agree with your thinking – develop instinctive tactical thinking through games that require choices in direction, opportunity, and what to do.  You make the rules to the game – the game does a lot of the work for you – can use multiple goals, gates, etc., and it makes the players think.  You can do all of this with subliminal tactics with an emphasis on skill.  By 12, you have a moldable player – Tony Kuster

Then again, changing the model is not in cash-cow clubs’ interests, as defined and encouraged by our National Federation dinosaurs.  Rich Jablonski

On top of our already large base of Special Kontributors, we also have Guest Kontributors. We thank all who have taken the time to kontribute to FUNdamentalSoccer.com!
PrevPreviousReevaluating The Role of Youth Coaches
NextFUNdamental ABC’s of Coaching YouthNext