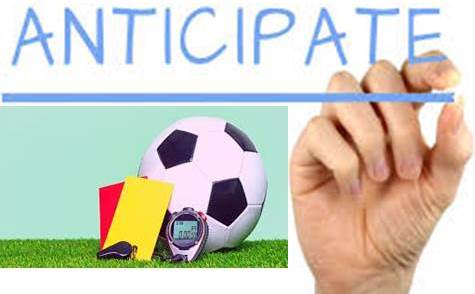 Ways to a More Successful Game

Officials need to have a good understanding of the game and their role as an official or they are destined to see a game quickly disintegrate and find themselves in trouble.

In order to do the job to the best of their ability, officials are expected to have a higher than average knowledge of the Laws of The Game.  In addition, they must be aware of any modifications or variations to the Laws that may be a part of different playing programs.  Such things as field and ball sizes, length of halves, and disciplinary actions are some of the modifications that officials are expected to be cognizant of once they accept an assignment.

To increase the odds of having a successful game, officials must develop the ability to read the game and anticipate what is likely to happen next.  They must put themselves in the best position possible to have the best angle of view of the action, wait for the play to end, and then make the decision.

All these steps happen quickly and officials must be mentally prepared to make each decision – foul/no foul or call/no call– promptly and decisively.

When making a call, only using the proper signals and approved mechanics help to communicate, explain and sell the decision that has been made.

Understanding the chemistry of the game at hand, anticipating plays and proper positioning are the best ways to be prepared for the next phase of play and to make the correct decision.  Those who formulate a premature decision about what is about to happen, before the entire play takes its course, risk finding themselves in trouble.

During set plays like corner kicks, alert officials will anticipate where the ball will land and which player(s) may become involved.  Premature whistles used during play in order to prevent a “potential” foul or to call a trifling one will interrupt the flow of the game and remove the opportunity for an advantage.

Premature and quick whistles during matches have stopped some great opportunities for teams.  Players, coaches, and fans can become upset and frustrated when a referee too quick on the whistle prevents a promising attack or a good chance at a goal.

Often left unnoticed or not quickly recognized and put a stop to, unsporting behavior can become a major problem for officials and can cause a game to get out of control.

A player being fouled unnecessarily or repeatedly, the coaching staff visually showing dissent and questioning calls, lengthy celebrations or taunting by players after a goal is scored, kicking the ball away after committing a foul, timewasting by a player or team, a goalkeeper preventing a player from retrieving the ball from the net after scoring a goal are but some examples of often seen unsporting behaviors.

By anticipating the potential of retaliatory behavior by the offended player or team the official can take immediate and appropriate action and by doing so prevent a game from getting out of control.