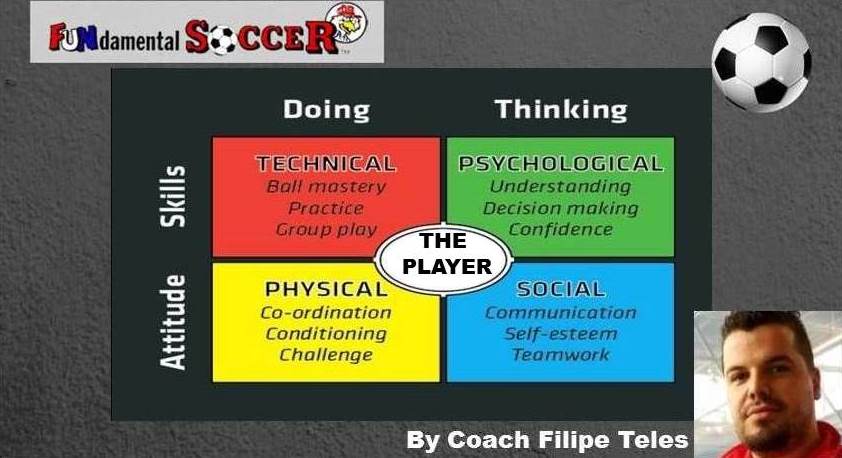 “The Whole is Greater than the Sum of its Parts.” First coined by the philosopher Aristotle, this phrase aptly defines the modern concept of synergy. For anyone who has played team sports, it echoes the T.E.A.M. acronym – Together, Everyone Achieves More.

Coaching grassroots needs to be way more than just teach kicking the ball around, it’s a chance of teaching players that soccer is way more than a game. When a kid joins a team, most of the times he’s nervous, but has a big desire to play, have fun and make friends. The club and coaches need to be conscientious of the impact that they’ll have in this kid’s future.

“A coach will impact more people in one year than the average person will in an entire lifetime.”  Billy Graham

As coaches we need to look on a Player-centric level, rather than a Team-centric. The focus should be on the individual primarily, and developing the collective of individuals you’ll develop the Team. Individuals success are moments not trophies, and those moments will affect the kids life’s on and off the field.

During a technical meeting at the club where I coach, our Technical Director once asked us: “Do you remember your third goal that you ever scored?”, all the coaches in the room started to think about it, nobody was able to come out with a answer, but after he asked “Do you remember your third coach?”, at that moment everyone was smiling and every single coach had some good stories to share. That simple question made me think about the impact that all the coaches made in my life while in sports, on my social life at the moment, my social life now and even the way that I raise my kids. I never thought about the tremendous influence that my coaches had in my life, today I’m a coach and I wish that I can deliver to my players that  inspiration, those memories, those life lessons and that desire for them one day follow the same route as me becoming a coach.

The 4 corners of Holistic Development in soccer. What is the holistic approach?

In soccer we “break” the Holistic Development approach into 4 main areas:

Personally, I’ll like to add another area, since during the week a coach (at grassroots) spends average of 3-4 hours with the player, it’s important to understand how everyone around this player is affecting him for the other 165 hours. Let’s call it the Village effect. I’ll talk about it later.

“It takes a whole village to raise a child” – African proverb.

How can we use the holistic approach when designing sessions? Let’s break the concepts for easier understanding:

All the technical skills need to be linked necessarily to the tactical aspects of the game.

For example, in a game a good pass, needs all the right technique to execute it (Use the inside of the foot – that’s the area from the base of the big toe to the central area of the heel, Under the ankle bone.)

But, it’s not enough, if not  linked to the Tactical aspects of the passing, when, where, how and why, (timing, Weight/power and purpose of the pass).  We can make 10.000 passes against a wall, if we don’t understand this questions it would be just ball movement, and never a good pass.

Target: Developing different range of techniques on and off the ball, and ball mastery.

Use different methods of communication to engage with different types of learners.

Target: Enjoy and get them passionate about soccer.

Target: Improving movement and the ABC’S

This is a simplified way to understand the 4 corners of Holistic Development in soccer.

If you remember, before this explanation, I mentioned another “concept” that I called it “Village effect”, in a very simple way, it’s everyone else that has influence on the day-by-day of the children, since parents, school teachers, family, friends, other activities coaches, neighbors, etc… All these people that surrounds the child will have an impact on his life, by words, actions, behavior or ideology.

As coaches we can’t just practice and “send them home”, we need to try to understand what is going on in their life’s, without being nosy, but this approach can actually give you some answers why the child is behave differently.

It may sound too much, but the impact of this 4+1 Holistic Development approach can help improve players to a completely different level.

(All my articles are based in my opinions and beliefs, please share with us your thoughts and opinions).