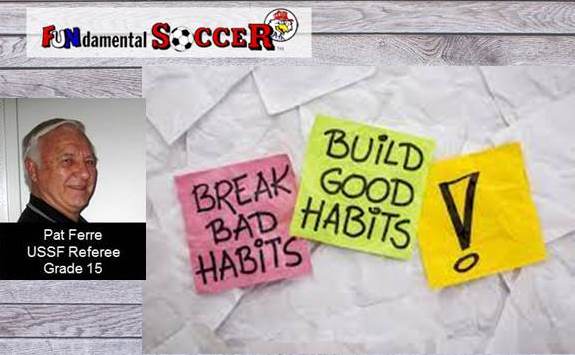 Skills and Habits of Successful Officials

Skills and Habits of Successful Officials

All should agree that knowledge of the Laws and mechanics is vital and crucial for an official to succeed. However, some officials have additional skills and habits that help them be more successful and earn more respect than others.

1. Arrive Early at the game site.

Always plan to be at your assigned field at least 15-30 minutes before the scheduled game time. There are specific pre-game activities that are the responsibilities of the officiating team, and those MUST be completed BEFORE game time. Inspecting the field, checking in the players, introducing yourself to the teams, having a meeting, and doing the coin flip are some of the Pre-Game activities required of the officials.
Those pre-game responsibilities are included in an official’s pay. Like any post-game reports, they are a component of the entire assignment.

Game time is when the whistle blows to start a match. Teams and spectators expect a game to start on time. A late start makes the officials look unprepared, uncommitted to doing a good job, unprofessional. Just like anyone who shows up late to work, school, practice, or a meeting, they may lose some respect because of it.

First impressions always speak louder than words. Make sure to be dressed appropriately and professionally. The required uniform should be clean, a shirt tucked into shorts, and proper shoes and socks. All officials must have the tools they will need: whistle, watch, pen, paper, coin, cards, before stepping onto the field. From the moment we appear, those around us are judging us.

As officials, this is not the time to be seen socializing with coaches, players, and fans.
While we may like to be noticed, we do not want to show that we have a connection to individuals or groups, which may eventually lead to concerns about calling a fair game.

3. Introduce yourself to the coaches and captains.

Know what you plan to say ahead of time and sound friendly when introducing yourself and your partners. Be clear with any instructions and answer any questions quickly, politely, and with confidence.

Before ending the meeting, ask for any further explanations of what was discussed and end with a positive comment such as: “Let’s have a good game!”, “Good luck to both teams!” or “Let’s go have fun!”.

4. Once you blow the whistle, get into the game.

Successful officials don’t just stand around waiting for the action to come to them. They show their athleticism by moving about the field, constantly striving to occupy a position with the best angle of view. Without getting too close to the players or interfering with the play, they want to make sure they see the action clearly to make the correct decision.

Reading the game to know where to be and where to go next without wasting time and energy shows that the official is deeply interested in the contest and strives to do the best job possible.

5. Don’t allow your decisions to be influenced.

Being a sports official goes hand in hand with being bombarded with comments from players, coaches, and fans.

Putting “rabbit ears” aside, successful officials learn to process the helpful information they hear, overlook the rest and go about the business of officiating.

Helpful information will often help with game management, control and solidify a path to a successful game for the official.

Reacting to useless, incorrect, or negative comments may influence a referee’s decisions and demonstrate a lack of professionalism. Eventually, more comments will be followed by the dissent, and game management will be affected and possibly lead to a loss of game control.