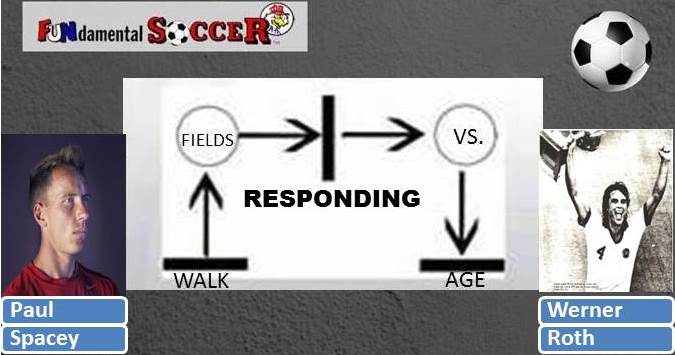 RESPONSES to PLAYERS PATH to PROFICIENCY

Thanks for the opportunity to expand upon what Graham and Jan rightly pointed out in the article, “Players Path to Proficiency.” The two critical factors in development; are access to small-sided courts or pitches (often with poor surfaces) and vertical pick-up play (playing up against older kids).

The two aspects mentioned by Graham and Jan are massively important from a developmental perspective.  The play-practice-play model introduced by US Soccer is definitely an improvement on their previous approach.  Still, that alone will make a minor difference (in my opinion) than it would address the two points raised by Graham and Jan. Of course, if all of the aspects mentioned were addressed in tandem (access to small-sided fields, vertical pick-up play, and better-organized practices), this would be a huge benefit to youth soccer in the US.

Futsal seems to be growing here, which is a big positive.  Access to futsal courts is great, but the same kind of development can be had from pick-up games on the field or random hard surfaces.  The development gained from playing unorganized, sometimes brutal pick-up games cannot be overstated.  The exclusion of adults from this equation is almost always a good thing for the development of young players.

I have some personal experience of the issues mentioned by Graham and Jan; let me briefly address this with my anecdotal evidence.  I played on tennis courts and basketball courts growing up.  Still, mostly I played 5v5 in an indoor hall for 10+ years (much of that as a teenager against adults, addressing the vertical play issue).  I wasn’t quite good enough to stay at the top level.  Still, I developed an exceptional game IQ and touch, primarily because of the indoor 5v5 exposure.  I’m absolutely sure of that.  Why?

That was the only differentiating factor between myself, my twin, and older brother; aside from the fact I played way more indoor soccer, our development and experiences were almost identical, and yet I can say with all due respect to them (they were both very good) that I developed into a much better player.

To summarize, no single issue will ‘fix’ youth soccer in the US.  It is a combination of factors that need to be addressed to see noticeable change (including all of the above issues).  Even then, culture and early engagement with a ball are additional issues, but I won’t expand on that for now; I’ve said enough!

Karl Dewazien, you asked for it; still agreeing with Graham and Jan, every element they mention in the article, “Players Path to Proficiency” will improve a player to one degree or another.

But I will add that, for me, the most critical elements in building those players mentioned.  I knew one of them very well, and possibly every major international star and large % of pros around the world are these:

Both conspire to instill such love for the game leading the player to achieve what is known through empirical research as the 10 Year, 10,000 Hours Rule.  When you do, the math is almost 3 hours per day of playing, training, and learning the game that you love.

And in this process, over the years, these players develop cardio-vascular interval stamina, with and sans air, which allows the heart rate to drop from total exertion to active rest in the shortest period of time, letting them go full-tilt boogie again in as little as 6-10 seconds.

And once you develop this stamina, it needs to be constantly maintained.

On top of our already large base of Special Kontributors, we also have Guest Kontributors. We thank all who have taken the time to kontribute to FUNdamentalSoccer.com!
PrevPreviousSix Values for Referees to Consider
NextMinimizing MistakesNext