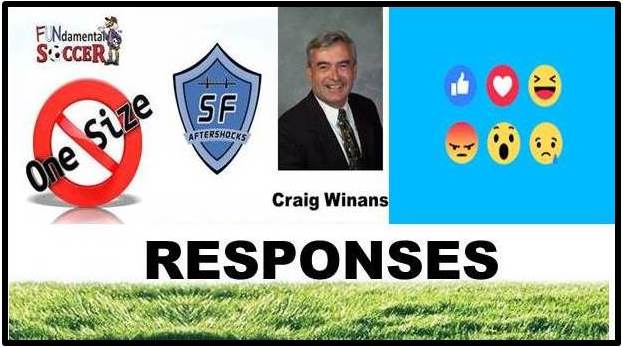 It’s just a matter of understanding the player’s age and cognitive and physical development.

The youth national was fantastic, and I know we’ve switched models. However, it’s still interesting to watch parents yelling at their kids. Like Pat says, what do you do? Well, you praise them and play them.

The lessons they will learn about making mistakes are essential. Their minds are molded, and we know as educators through peers and parents peers. It’s so important to forget the “soccer” aspect and, if they score the opposite goal, to still cheer. They’ll learn that later on.

I believe that 4-7 years of age is about social and physical development. Yes, at some point, the parents’ actions need to be addressed but not in public and in the correct way: the way we deal with these children will help shape a good and empathetic citizen. That’s so important to remember.

I almost believe we spoil our players with perfect pitches and equipment. Some of the players that I’ve met that were most creative grew up playing in the dirt between buildings in the UK. Having to learn the nuances of the bumps and different angles and creativity came from these moments. I did not grow up in the suburbs…a wall and a ball.

One of the best SHORT answers to the reason for training coaches.  A small % of players will move on from “Recreation” ball.  Still, if we teach them the love of the game (and one of my happiest memories ) is seeing players, I coached bring their kids back to the game and maybe even coach those kids.  Thanks for the thoughts, Craig.

One of the most challenging aspects of coaching youth is getting those kids you know are being hammered in the car at home. It doesn’t take long when it becomes obvious to spot them at a training session. The most revealing moments are when they are not in the game, and you ask them to go in and request not.

Do you know this kid is getting crushed but is it your business to tell the parent?  This can be handled in many ways. I prefer to call it as I see it.

But that could lead to potential escalated abuse hurled at the child. “Your coach said you didn’t want to go in….” When I say it, the parent fails to hear that they are the reason the kid doesn’t want to play. The easiest was the kids on my college teams, it was apparent they did not want to play, and the parents were driving the bus. A tough one to see, and I see it too often.

This past weekend, I watched my 10-year-old granddaughter and 14-year-old grandson play Soccer.  Although the games were enjoyable, I looked for the missing coaching trait. My 14-year-old team still lacked certain aspects of the game, and the 10-year-old team lacked many basic skills. When I asked other parents and players, I was told that the coaches do not teach them that. These coaches charge more than they are worth, which is a problem?

Very true. Coaching is relevant to individual needs based on the player and type of development and can also change with every country due to their individual styles of playing soccer.

On top of our already large base of Special Kontributors, we also have Guest Kontributors. We thank all who have taken the time to kontribute to FUNdamentalSoccer.com!
PrevPreviousAddressing Our Referee Shortage
NextThe Game Is the Greatest RevealerNext