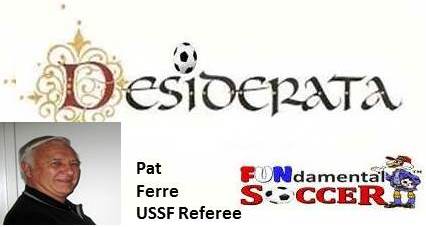 “Go placidly amid the noise and haste and remember what peace there may be in silence.”  Max Ehrman, Desiderate, Circa 1920

Officials need to understand the game’s dynamics at hand and determine why a coach may be yelling.  Not ALL yelling may be directed at the officials.  Some coaches may find the need to “yell” at their players to motivate them, give them instructions to prevent further mishaps, or praise some good plays.

Yelling at officials may carry different messages.  It can be a question: “How could number four be called offside?”, a critique: “How can you call a foul and take away our advantage?”, or support: “Good call, ref!”.

Yelling, in and by itself, should not be considered a criticism of nor a personal attack on the official. Due to the distance involved, coaches may see the need to raise their voices to be heard.

Coaches who constantly yell may find that the officials, and in cases their players, will eventually shut them off and no longer hear them.

Besides coaching and keeping up with the activities on the field, coaches (especially at the lower levels of play) have other bench issues (substitutions, injuries, etc.).  Due to circumstances, a coach may not be as focused on the game as the referee is and may interpret plays differently.  Their attention may be momentarily distracted, and when they see or hear a call go against their team, their reaction of “What was the call?” may come across more like a challenge than a question.

Referees need to analyze the comments they hear from coaches (players and sometimes fans as well).  They need to recognize the delivery as well as what the message is behind the comments being made.

Not everyone may interpret comments being made in the same way. Still, when the situation becomes irresponsible behavior on the part of the coach, the referee must deal with it.

A recognized process is the “Ask, Tell, Dismiss” method recommended at all levels of soccer.

When the problem does not seem to be going away anytime soon, the referee can no longer ignore it: