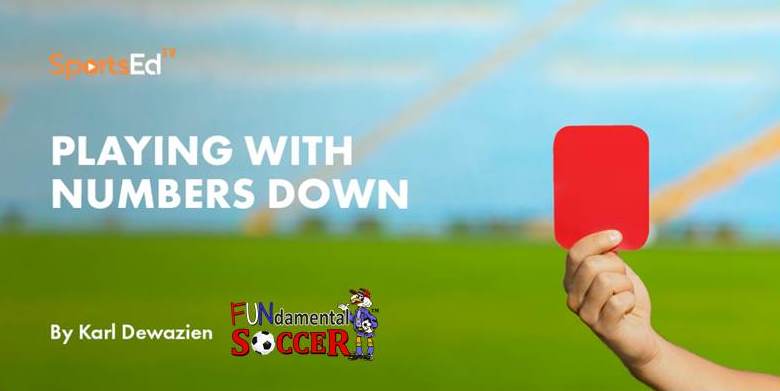 PLAYING WITH NUMBERS DOWN

SportsEdTV Soccer is committed to bringing athletes, coaches, and parents pro-level Soccer education videos for FREE. All levels, anywhere, anytime. Check out our entire instructional library and sign up to join our Soccer community.

Karl Dewazien of FUNdamental SOCCER, Emeritus State Director of Coaching for the California Youth Soccer Association 1978-2012, discusses what coaches need to know about playing with numbers down.

Many coaches panic when their team is ‘forced’ to play with numbers down. Players get carded, injured, or not enough show up for the game. Let’s not panic since there are some benefits to playing numbers down.

If anything, your team may be at an advantage, at least mentally; having one less player on the field ‘forces’ the players to play more efficiently and as a team. They will tend to realize that they need to rely on each other even more. They will have to make up for the deficiency by giving better support to teammates and making the ball work for them in the attack. They will also work harder to help each other by better covering in defense. Let me explain:

When Attacking – the players will realize that they do not have the same number of options to pass as a whole team. Therefore, they will (hopefully) make the opponent’s job more difficult by keeping the ball moving. The player with the ball will, in this situation, are faced with a numbers-down situation. That is, the opponent will try to double-team the player with the ball whenever possible. To avoid this pressure, the players need to realize that the ball moves much quicker than any individual. The players need to keep passing and moving quickly to make the opponent work to get the intended numbers up.

Sometimes being outnumbered brings out the best in a team, as players are forced to play together very efficiently.

A good coach will have practiced ‘playing short.’ Possibly working on one-touch and two-touch play with an emphasis on a quick release of the ball. A coach will have practiced and convinced the players that down one player does not drastically change the environment. A coach will have shown that, with only four players, the essence of attacking (support) play is still applied. The player with the ball still needs options, and the supporting players need to move and position themselves to become available. Players are available:

1) Through the long axis (a through or forward pass)

2) Left and right (a square or diagonal pass)

The organization is still there, and all the players need to do is carry out their duties.

When Defending – the same attitude should apply since there is only one ball on the field. The defensive objective is to stop the opponents from putting it in the goal. We must be a little more aggressive at covering for each other. The closest defender is still looking to pressure as fast as possible. The next defender is responsible for giving good cover. All other defenders should move into supporting (balancing) positions that help teammates and limit the space available to the attackers. Since this is the basis of our defense with any numbers, not much will have changed by playing one man short. As mentioned before, the players may play better defense when they are at a numerical disadvantage. This may give them cause to work a little bit harder than usual.

Again, the coach needs to practice playing ‘one man’ short during practice. It should not be a surprise for the players to adjust to the playing environment during a game. Practices should prepare the players for any situation. The loss of a player through injury or ejection is a reality that needs to be covered.

Occasionally practicing with uneven numbered teams can be beneficial as it helps the players understand the new dynamics of the game in that situation and be prepared to compete in numbers down situations.

With proper preparation, the coach can bring success to his players no matter what the situation. It may be hard to believe, but shorthanded teams have won many a game because the team with numbers up eased up enough to make the teams seem even. From the youth to the professional level, players who think they have an advantage will let that affect their play. And the effort they give is not the same as when the teams are at equal numbers.

As stated many times, the game is mental and physical, and when we don’t give 100% in both areas, we will be at a disadvantage.