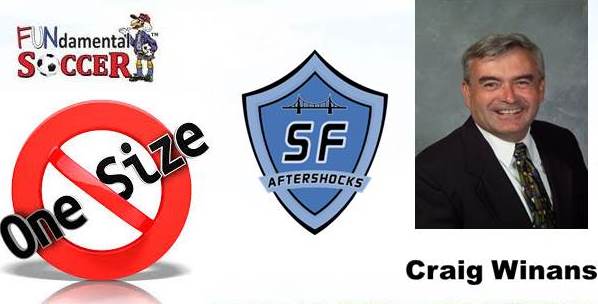 ONE SIZE DOES NOT FIT ALL

I don’t think there is a one size fits all solution. Comparing the United States to other countries is also not the answer.   I feel that a license doesn’t necessarily mean the coach the person is qualified to coach youth; however, having a license doesn’t mean a person is a bad coach.

True, Soccer has become a cottage industry. I have been coaching for over 50 years. The majority of that time, I volunteered my time. Full disclosure: I have my U. S  Soccer A License and am also a U. S. Soccer Coaching Educator. I see coaches at various stages. The majority of coaches I see coming through the current curriculum are coaches. I would be fine if they coached my children when they were growing up. Are there some coaches I see I feel shouldn’t be coaching? Of course, the answer is yes.

Different areas have different needs. Smaller communities have different needs than larger cities. Professional players come from all over. But one thing is a constant. Megan Rapinoe grew up in Redding. A city of less than 90,000, 162 miles north of Sacramento. Sebastian Lletget was born in San Francisco and grew up just under 5 miles from San Francisco. The Bay Area has a population of almost 10 million. Different areas have similar results.

Players need the opportunity to take risks. To be allowed to fall flat on their face, with their coach there to help dust them off and encourage them to try again. No-Risk = No Reward. Giving players permission to fail is one key to success.

Get rid of drills and have players play!

Please encourage them to take players on (not in front of their goal, mind you). Many coaches would rather have a player pass than take an opponent on.

But the most important component needed is for players to develop a ‘Love of the Game,’ and to do that, they need to have FUN!

A survey of professional athletes said their worst memories of playing sports growing up was the car ride home. We need coaches who allow children to be children. That means parents need to allow the same.

Thank You – Coach Winans, for sharing your thoughts on what your qualities/traits of the “Model Youth Coach” are.

I hope you enjoyed this article and are looking forward to reading, gleaning advice in future articles on this theme to improve yourself, and sharing ‘it’ with coaches in your soccer community.

I also encourage you to join this discussion because your advice may help improve another youth soccer coach …Priceless..!