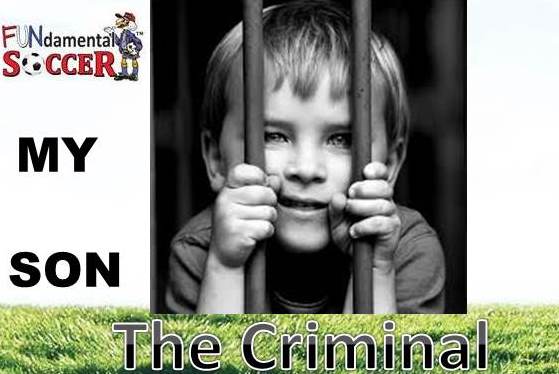 My 11-year-old son Kyle is a threat to national security. He must be, or it wouldn’t take an Act of Congress to let him play soccer with his school friends.

Our sad tale began innocently enough on a sunny day several months ago, when our local soccer club held tryouts for the competitive and upper house teams. Kyle was there to do his best and was chosen for upper house.

Kyle did not know a single boy on the team, but he loves the game, so that did not concern him. The coach was a fine and experienced man who loved the game.

Kyle enjoyed the practices, and to help him further develop his playing skills, we sent him to a soccer clinic that was being held at his elementary school.

Little did we know the evil force that awaited us at this seemingly innocent clinic. While Kyle happily spent his days running sprints and doing passing drills, someone was watching.

Oh sure, that someone seemed harmless enough. In fact, she seemed like Kyle’s best friend’s mom. We had no idea she was a spy. In hindsight, we must ask ourselves how we could have been so stupid. Sure the Cold War was over, but they never had to play soccer.

The friend’s mom approached us and said that her son’s competitive team in town next to ours needed another player, and she wondered if we would let Kyle try out.

I have to admit, our guard was down. After all, we had stood shoulder to shoulder with this woman serving pizza in the school lunchroom. We had even chaperoned a junior-high dance together, for goodness sake? We never suspected that she was a threat to Western civilization. What fools we were.

Well, Kyle practiced with the team and loved it. To make matters worse, they loved him. The coach was a delightful and humorous man who was obviously dedicated to the kids and put their interests first.

He said that we needed to get a few forms signed, and the transfer would be done. We wonder now – was he part of the conspiracy, or was he just lost as we were?

We went to our soccer club and requested the forms. We were told by our soccer club that his sort of transfer was not done, but then why was there a form for it? Then they said they were out of forms, so we got some from the other town’s soccer club. We thought we were helping.

We were obviously blinded by the selfish goal of having our son on a top-level team with his friends and school friends. We somehow failed to grasp the magnitude of our offense.

Suddenly the word “poaching” was added to our vocabulary. I thought poaching was something cooks did to eggs, and hunters did to moose out of season. My son was none of these things, yet he had apparently been poached before our very eyes! Again, evil forces were afoot.

To accomplish the transfer, we were told we needed signatures from several people. These people had lofty titles that would make the British Parliament envious, but they never returned telephone calls.

We called the President of the league several times, and never heard back from her. We soon learned that our local soccer club was the great black hole of soccer. They will take players from anywhere, but will not let any go, even if they have previously turned them down at try-outs.

We were caught in a circle of egos. This was obviously the only place where these people could feel important, and they were going to make the most of it, but nobody would actually decide anything, because if you don’t decide, you can’t be wrong.

We were told that the board would have to decide on the transfer request and that they didn’t meet for another three weeks. If they approved, there was a two-week waiting period before our son could begin playing for the higher team, even though the two teams are in the same district. If they turned down our request, we could file an appeal.

Obviously, their hope was that if they stalled long enough, we would give up and go away – a sound business strategy if I’ve ever heard one.

This began to sound more and more like an exercise I had done in law school years ago, so my natural instinct was to prepare for a fight. Then I stopped.

This shouldn’t be about petty kings and their little kingdoms. It shouldn’t be about gown-up egos and turf battles. It is about kids kicking a ball on the lawn. Nothing more. And the so-called adults who are getting in their way should be ashamed of themselves.

People who take these things seriously are not serious people. They have lost sight of their goal; to help kids learn and enjoy the game of soccer.

I could be wrong, but I don’t think driving kids away is part of the league’s mission statement. Maybe they should go back and take a look?

Or maybe they should stop talking to each other and talk to the kids kicking the ball on the lawn. That’s what it’s really about.

Just when we thought all hope was lost, we found a friendlier ear. He was either a double agent or a dropout from the league’s political indoctrination program. He actually believed that since our town’s competitive team had not selected Kyle, he should be able to play for the new team, so he signed our forms. His life may now be in danger.

As for my son the criminal, I fear for his future. I have nightmares about him filling out a job application 10 years from now:

Ever been arrested? Y/N
Ever convicted of a felony Y/N
Ever tried to switch soccer teams? Y/N

Oh, the shame of it all … I hope that this practice will be part of the past after these trying times! The End

On top of our already large base of Special Kontributors, we also have Guest Kontributors. We thank all who have taken the time to kontribute to FUNdamentalSoccer.com!
PrevPreviousHow To Coach Technique – The Learning Chronology
NextTWO UNIQUE SOLUTIONSNext