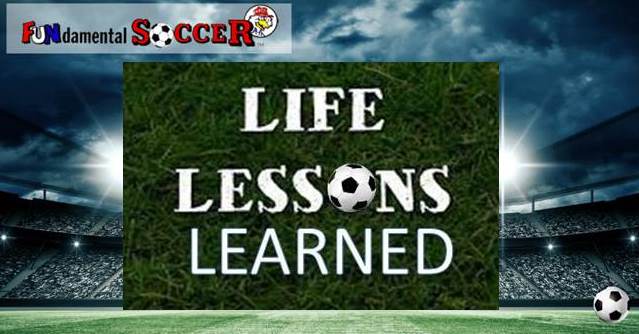 Life Lessons Learned from the Sidelines

Here’s the thing about Life, it keeps coming at you with the same things. Every soccer game I go to, it’s the same old thing. For a long time I wondered how much of my life was going to be wasted sitting in bleachers chasing my kids around, hollering at refs, and getting so worked up I could hardly sleep.

But then one day it dawned on me. It’s just like anything else we spend our time doing: it’s a part of this great big test we’re all taking. Someone up there loves us enough to give us innumerable chances to figure things out and finally find the right answers. He wants us to pass, and so he gives us a world full of wonderful metaphors.

It’s often much easier to see the lessons in other people’s challenges than it is to see them in our own. As I’ve sat in the bleachers for the past 15 years watching my high school sweetheart call plays, tangle with refs, and give high fives, I’ve seen enough to realize that athletics are a perfect microcosm of life. The metaphors are truly endless, but they’re really only noticeable when you’re able to see the whole picture.

When you’re watching your own child, grandchild, nephew, or best friend’s cousin’s godchild (which is true of the majority of people attending a high school or youth sporting event), you’re much too intensely focused on a single aspect of the game to see the vast applications of what can truly be a meaningful life experience. Being a coach’s wife, or any other interested-yet-somewhat-removed spectator affords one the opportunity to sit back and observe a lot of things others might not notice. Sure, every time I show up I am there hoping my husband’s team wins, but as the years have ticked by my presence at a game has come to signify more to both of us than fan-hood. It is a show of support for him, regardless of what happens, and an acknowledgment that we are in this thing called life, as well as this thing called basketball, together.

From personal experience, I know there’s a difference in the view from the bleachers depending on whether you’re a parent or a non-parent. I have attended games as a mom, too, and I’ve noticed a gigantic difference. In those instances my scope is noticeably narrower: I want my team to win. I want my kid to excel. I want the refs to stop making bad calls and I want the lady with the big mouth on the other side of the gym to eat crow when my son stuffs her son.

As a coach’s wife, on the other hand (when the kids I’m watching aren’t my own biological children), something happens to my brain that doesn’t happen in the other scenario: it actually works. It must have been a coach’s wife, or maybe a coach’s kid or parent, who first gave us deep philosophical sayings like: “It’s not whether you win or lose; it’s how you play the game.” Parents of players, especially in the 10 minutes immediately following a game, are more likely to come up with less-inspiring sayings such as “Those refs are idiots” and “Joey’s a big ball hog.”

As a parent, I can truly say I haven’t learned much about the game of soccer at all, much less the game of life. In my role as a coach’s wife, however, I’ve found some priceless treasures. Some of them have been very difficult — even heartbreaking — and some of them have brought great joy into my life. In the hope that they might make someone’s next sporting event even the tiniest bit more meaningful, here they are in reverse order:

No. 10: You can’t please everyone. You’re lucky if you can please one or two people at the same time, in fact. The truth is, though, that if you have as your goal pleasing your Heavenly Father, how the rest of the people feel about you doesn’t really matter so much. On the other hand, if your goal is to please Number One, whether you’re a coach, a player, a parent, or an administrator, you can pretty much count on not pleasing anyone, especially not God, and in the end, not even yourself.

No. 9: Some people will turn their backs on you if they don’t get out of the relationship what they wanted. In sports, this equates to a parent who befriends a coach for months and then, once soccer season comes along, goes around bad-mouthing (or worse) the same human being simply because their son or daughter didn’t get to play the right position or the right amount of minutes. It happens in life just like it happens on the court. Sometimes you’re not surprised, and sometimes it’s someone you truly had faith in. Regardless of the situation, it always hurts.

No. 7: A lot of people leave their religion at church on Sunday. This, too, is reflected in many aspects of life, but sports seem to have a unique way of bringing out people’s true colors. Being a part of a team can be hard. Sometimes you lose as a team, and sometimes you feel like you’re losing all alone. It’s very hard to practice what you preach when your heart is being torn out of your chest, but I guess even more amazing than the fact that many people don’t live up to their own standards is the fact that some actually do.

No. 6: Real winners put their teammates first. We all stand in admiration when someone comes out on top because they are exceedingly talented or driven. But what really makes us happy is when someone puts someone else first so that the other can feel that joy instead of themselves. It doesn’t happen often, but when it does we’re all reminded of what real winning means.

No. 5: Sometimes the game isn’t fair. Sometimes the refs really do have an off night and blow some calls. On the other hand, sometimes the luck breaks on your behalf, and the fans on the other side of the field are the ones making fools out of themselves. Soccer, like life, is unpredictable. The good comes with the bad, or shall we say, the blessings with the challenges.

No. 4: Everyone and I mean everyone, is capable of acting like a horse’s you-know-what when their children are involved. If God gave us as parents an instinct powerful enough to allow us to throw ourselves in front of a speeding truck to save our child’s life, it shouldn’t come as a surprise that the sight of a broken-hearted child riding the pine can transform a normally demure Relief Society president into a hysterical, raving lunatic. As I said, everyone is capable of acting badly in a scenario like that. The true difference is that some hysterical lunatics apologize later, and some stick to it like glue.

No. 2: When they lose, most people blame the coach and other players. When they win, most people blame themselves. Of all the lessons I’ve learned, perhaps this one is the most transferrable between metaphor and reality. When life is hard, it’s so much easier to shake our fists at God and at the people we perceive as the ones who messed things up for us. Maybe they fired us, cut us from the team, passed us up for a job, broke up with us, or gave us a bad grade. No matter what it is, it is easier to blame someone else than it is to see that maybe, just maybe, we truly got what we deserved. On the other hand, when things are great, we all tend to pat ourselves on the back rather than thank God for His blessings or recognize the kindness of another who helped us get where we are. In 15 years the number of parents who’ve come up after a game and told my husband thank you for coaching the team through a loss can be counted on one hand. Conversely, there are probably not enough hands in the little town we live in to count the number of times it was his fault we lost by one point to the best team in the district.

No. 1: In spite of all the pain and stress and hard work and difficulty, it’s wonderful to be a part of the game. If I had a nickel for every time I vowed I wouldn’t live through another soccer season, I’d be a rich woman. It’s hard. It’s hard to watch those girls work so hard and most often see their dreams of state championship trophies simmer out along the way. It’s hard to watch my best friend attacked, whether by misunderstanding, well-meaning parents or by downright ignorant jerks who haven’t got the sense of dignity God gave a mule. It’s hard. But, and this is as true about life in every aspect as it can be, it’s worth it. It took me a long time to learn to sit back a little and shut my mouth during a basketball game. I’m still working on it, and it’ll probably be many years to come before I can turn the other cheek to someone screaming profanity at my high school sweetheart while he sweats his guts out trying to make their daughter happy and successful. But I’m learning — not just how to do it, but why I should.

On top of our already large base of Special Kontributors, we also have Guest Kontributors. We thank all who have taken the time to kontribute to FUNdamentalSoccer.com!
PrevPreviousAvoiding Blowouts
NextA Fantastic StoryNext