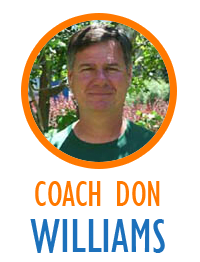 Don Williams is the Head Men’s and Women’s Coach at Feather River College after 12 seasons as an assistant coach at Cal State East Bay. Williams also served as a coach for the Bay Area Seals of the United Soccer League (USL) in 2000. Williams was also responsible for training goalkeepers for the Northern California Olympic Development Program (ODP) for more than 10 years and served as a staff coach for the Northern California Youth Soccer Association during that time.

Williams has trained players to go on to play in England, Germany, the MLS, the USL, as well as all levels of collegiate soccer. In addition, Williams’ players have been selected to play at all national youth levels including the ODP and U.S. Youth National teams.

In 2013 Williams became the winningest soccer coach in Feather River College history notching his 28th win on the women’s side and his 51st win on the men’s side. In 2013 season the women’s team had the best record in school history with a .795 win percentage.

When keepers dive for shots hit low and to the side, one of the biggest mistakes they make is to not get their hands low early.  What this means is that when a keeper dives to his left side for a low ball, he will take a last step with his left foot to the side and forward (approximately a 45 degree angle) and then as soon as possible get his left hand in front of her left foot [...]

For Coaches For Parents For Referees Addressing the Issue Striking a soccer ball has been compared to a golf swing and me trying to say what is causing a specific spin on the ball without seeing the strike is like me going to a golf instructor and saying that I slice the ball, now without ever seeing me hit the ball, can you tell me why. Any skill in life, whether it is striking a golf ball, [...]

Stay on Your Feet As Long As Possible

For Coaches For Parents For Referees Stay on Your Feet As Long As Possible Keepers that do too much diving or dive when it's not necessary often suffer from poor footwork. Other times it's pure laziness.  Some of the dangers of diving when not necessary. Increased risk of injury. Greater risk of not being able to hold a ball. Not being able to make a second save if the ball is not held.  When I'm training my [...]