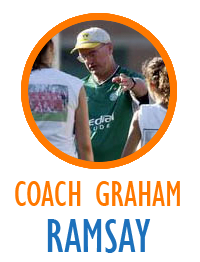 Graham Ramsay is the former Director of Soccer Development for the Maryland State Soccer Association with nearly 20 years of service to the youth in that state.

Graham was one of the first National Staff Coaches for US SOCCER and has written several books and numerous articles. His latest book, SOCCER FOR GIRLS has sold nearly 60,000 copies worldwide. Graham has spent extensive time traveling with soccer teams in Brazil. As well as coaching in Saudi Arabia, Bahrain and across Europe.

While in the USA has coached in over 30 States doing clinics, workshops to helping college teams reach the NCAA’s to taking Annandale Boys Club to winning the McGuire Cup (U19 National Championship) to developing high school programs to help creating one of the finest youth programs in the USA – MSI in Montgomery County, Maryland.

Another World Cup and probably more surprises as more and more countries are capable of causing upsets. Gone are the days when you could almost pick out the semi-finalists. That day has gone with the game spreading across the planet like never before. Teams are tactically smart & talented be they a small country like Belgium to a giant like Brazil. Plus the media coverage is vast and if Ronaldo catches a cold the whole world knows about in less than a day. Remember BRAZIl '14? it came flew by and most can hardly remember the moments that shocked the world - Spain, the then world champions in the first round losing in spectacular fashion to Holland 5-1 to the final game, the final itself with Germany defeating Argentina to deservingly taking the Cup back to Berlin.

Letter to the Editor

EXCELLENT Koach Karl!!!!! The point about coach’s stop learning in your article, “Become a Soccer Intellectual” is so true. The idea of reading and studying the sport has taken a knock in the past decade. This maybe the result of TV and the easy access to DVD's as so many ideas have moved to a TV screen and so it is far easier to sit and watch whereas reading takes effort & concentration. These two skills seem to be in [...]

Changing Your Culture in 2017

For Coaches For Parents For Referees Changing Your Culture in 2017 How do you take you take a losing program and turn it around into a positive one. Not just results wise but across the whole program. If its been a traditional losing program then major surgery is required starting with new management and a fresh approach. The past is the past but retain any positive vestiges from that experience. New energy needs to be created to spark [...]

For Coaches For Parents For Referees Born in the USA – Small sided Games What makes for skillful play?  What type of game encourages players to try clever tricks?  The answer, obviously is small sided games.  Yet still the majority of junior leagues in the country only play the adult game of 11-a-side where chance and force generally crush skill.  To my mind there should be a national crusade to advance small sided leagues and then skill would [...]