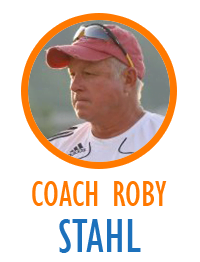 He has played and coached professionally overseas and in the United States. He has been involved at the National Level within the U,S. at numerous levels. Some of Roby’s former players include Michelle Akers, Julie Foudy, Kristin Lilly of the US Women’s National Team and with many other players now playing overseas or within the MLS.

Roby is one of the most experienced coaches in the United States and brings an Elite approach to coaching our youth!

Learn more about Roby at the AFC Lightning Website.

Getting Along With Your Coach

A coach can be described as an expert who has spent a lifetime acquiring and perfecting knowledge in a particular area. He is a friend who sometimes reminds you of what you already know and just fine-tunes it. He also teaches you new things to expand your horizons. As he can have a tremendous impact on your athletic career, it’s important the two of you get along. Here are a few hints to help you gain his respect and make him work for [...]

For Coaches For Parents For Referees Small Sided Games? I received this letter from one of my coaching colleagues, Ashley in New Jersey, and thought it was thought-provoking! While watching the Sky Blue team play the LA Sol this weekend an internal fight between me and my coaches reared its ugly head as I found myself arguing the “touch” versus “keep away” argument as we were watching both teams warm up! “Small sided keep away and the value [...]

For Coaches For Parents For Referees The French Football Federation Technical Advisory Board and Player Selection Process This is the third article in a series that was started two years ago. Please refer to the previous articles for background information. Some items will be discussed again as thing change in the world of soccer federations, curriculums and training methods. This article consists of conversations by Mr. Aime Jacquet, winning coach of the French National team during the [...]