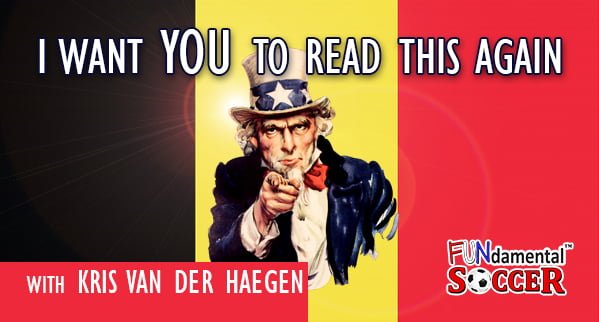 I want YOU to read this again

An overwhelming number of readers have asked, “If Belgium can have such dramatic player development results by simply administering ‘7 Common Sense Principles’ – Why Can’t We?

Stan Baker, included in his brilliant book “Our Competition Is the World,” the following rational explanation:

“Developing a coaching philosophy is similar to developing a road map for traveling. Just as there are no two roads that follow the exact same path, no two coaching philosophies will ever be exactly alike. Coaching philosophies may take various forms, with each helping to reach the same destination. The importance a written philosophy of coaching plays in communicating a plan to all coaches cannot be overstated.  It is more difficult to take a group where you want them to go without direction!”

Belgium Director of Coaching Education, Coach Kris Van Der Haegen, was aware of the importance in writing out a coaching philosophy. He created his ‘7 Common Sense Principles’, which have been credited in leading the Belgium National Team to the #1 ranking in the world..

The readers also stated that a synopsis of the ‘Principles’ was warranted. They encourage coaches to read them and are urging Directors of Coaching to implement them for immediate success!

One of the main principles is that the main actor is the player; not the coach, not the team.  It’s very easy to understand that in children’s football [soccer], we have to do what they like. We call it the tailor-made approach. Who is in front of me? Look at the characteristics of the player and then adapt the environment to fit them.

Kids want to play football [soccer] in their own way, not the way adults want to play. We created a format that is tailor-made for this.  At five and six years old, they play 1 vs. 1 with a goalkeeper.

We play two halves of three minutes, and then they go to the next pitch. The winner goes to the left and the loser to the right. After one or two games they will be playing against a similar-level opponent and everyone scores goals, everyone wins games, lots of ball-touch which makes it fun. Teaching 1+1 and 1 vs. 1 podcast]

This is an amazing project funded by the Flemish government. It is about basic motor skills – making children active in several sports and at a later age, they can decide if they prefer basketball or soccer or whatever. That is very important.

If you want creative players, you must create an environment of freedom. That means a coach who observes, who is there as a guide, who will help them reach their destination, but not a PlayStation coach, who says, “Do this, do that,” who makes the decisions instead of them.

Create the environment, free them and help only if it’s necessary. Let the kids discover, they are more intelligent than you think they are.

You might want to do a passing and shooting drill as a warm-up, but then you have to go into situations where the players are aware of the opponent and are thinking “how can I create space for myself?”

Football [Soccer] is complex and it is a decision-making game. Young players must be in an environment of making decisions by themselves. Once the game starts, the coach is out. The player has to read the game, make the decisions. (click for KD podcast)

Coaches are inclined to focus on winning the game. That makes them play the big, strong players who give them the best chance of winning, so the late developers end up on the bench 75% of the time.

We play the game in 4 quarters. All the substitutes MUST come on the pitch after the first and third quarter so that they all play 50% of the game. Otherwise, they don’t develop.

Remember that slogan again – “Love the game! Then the learning can start.”

7. LOOK AFTER THE LATE DEVELOPERS

Late developers will go one year lower if they need to. Then they can play in an equal battle and show their skills.  If you don’t do this, you can lose some big talents who are late maturers. Nacer Chadli, Dries Mertens, Kevin De Bruyne – they were all late maturers.

In Spain, Real Madrid and Barcelona are really focusing on late developers, because they are aware of what they can do. If you give them the time to grow, they can develop into a Messi or an Iniesta!

Thank you, Coach Kris Van Der Haegen, for allowing me to publish your principles!

On top of our already large base of Special Kontributors, we also have Guest Kontributors. We thank all who have taken the time to kontribute to FUNdamentalSoccer.com!
PrevPreviousHow many times can you juggle?
NextLearning from FIFA’s #1Next