How To Coach Technique – The Learning Chronology

SportsEdTV Soccer is committed to bringing athletes, coaches, and parents pro-level Soccer education videos for FREE. All levels, anywhere, anytime. Check out our full instructional library and sign up to join our Soccer community.

Karl Dewazien of FUNdamental SOCCER, Emeritus State Director of Coaching for the California Youth Soccer Association 1978-2012, breaks down the learning process of players and explains how coaches can be most effective in teaching technique.

For years it has been advocated that OBSERVATION, IMITATION, PRACTICE & then TESTING was the correct sequential method for teaching technique to younger players. 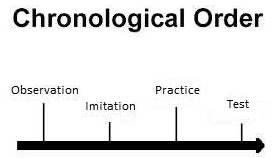 Let’s take a closer look at each step and add some modern ideas to improve this traditional approach by teaching a special dribbling move.

First, OBSERVATION of the technique is necessary. Observation allows the ‘mind’s eye’ to see what is involved in the movement that a player is trying to learn. Provide players with an example of the technique being done correctly, whether through video, by another player, or by the coach.

The addition of ‘visualization’ has dramatically enhanced my demonstration/explanation method of teaching. I have added the ‘visualization’ technique in recent coaching courses and training sessions and have been amazed at the results (almost instant learning!). 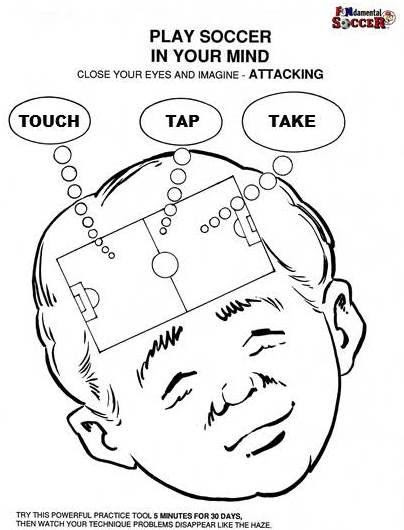 After giving my demonstration, I have the coaches/players close their eyes and say the ‘buzz words’ (‘Touch’ – ‘Tap’ – ‘Take’) out loud. I verbally walk them through the technique in a very detailed sequence (See Illustration) 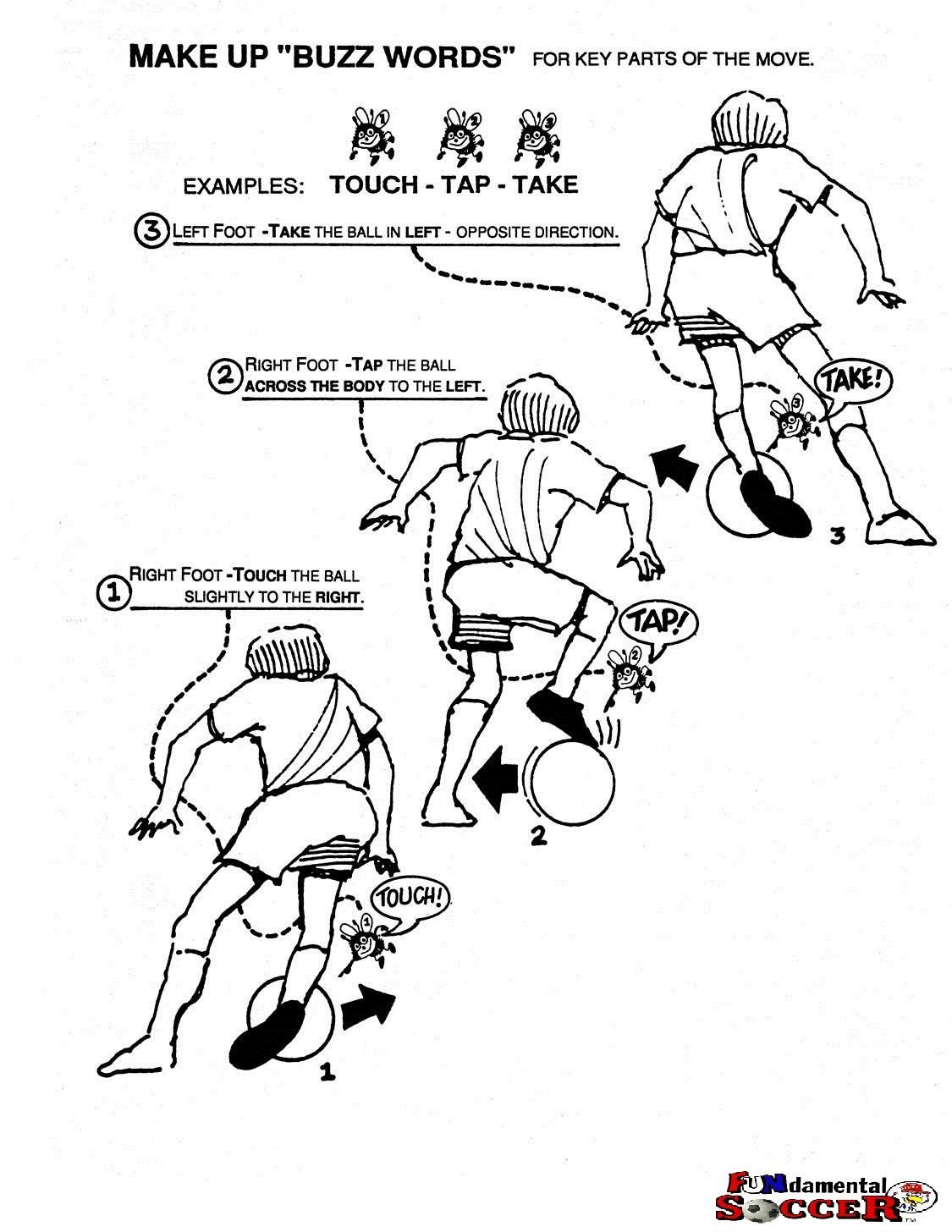 With their eyes still closed, they are asked to see the buzz words in their mind (‘Touch’ – ‘Tap’ – ‘Take’). Then, repeat the buzz words quietly to themselves and eventually out loud where I can hear them. I ask the coaches/players to picture themselves making the movements as I am talking. 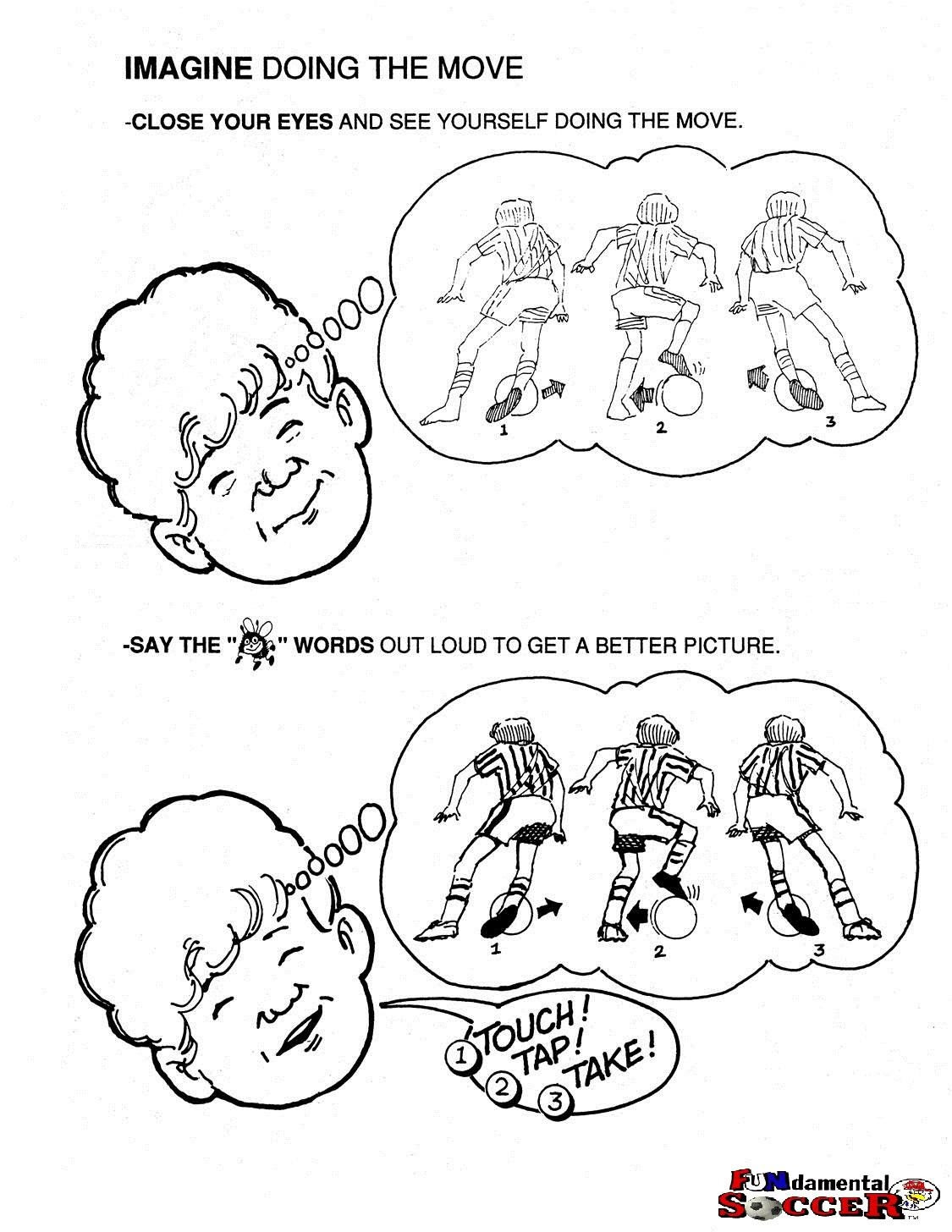 Now that the movement has been observed and mentally practiced, it is up to the individual to IMITATE the movement. Only after they ‘feel’ and ‘see’ themselves ‘Touching-Tapping-Taking’ correctly in their mind, are they asked to get a ball and go through the sequence while saying the ‘buzz-words’ again out loud.

The player might already be able to replicate the motion, but the technique is not second nature yet. Only through repetition can any technique become instinctive. (Practicing perfection by 10,000 touches)

The correct technique must become instinctive, and no bad habits formed. The imitation phase, especially at its start, should focus on proper technique and form rather than speed. The coach should watch to make sure players are flawlessly approaching the movement. As the player starts to get a feel for the proper execution, they can slowly begin to speed up their practice.

Should the coach or player still have difficulties performing the sequence? Then, I apply ‘kinesthesis’ and physically adjust the individual’s body parts to help them achieve the correct ‘feeling.’ 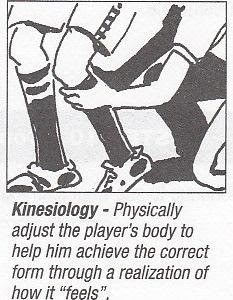 A caution – PRACTICE of the movement must be as realistic to game conditions as possible. In this example, after first being introduced to the ‘Touch-Tap-Take’ sequence and moving through the observation and imitation phases, a player will start by facing a stationary opponent, advance to a walking/jogging opponent, and eventually a game-speed opponent.

The opponent is told to increase the defensive pressure as the players’ confidence and ability increase to best prepare them for a game scenario. Be careful that in the haste of competing, in practice, the technique does not deteriorate.

Helpful Hint:  When in doubt, slow down the action and go through more successful repetitions; they are the key to learning.

Then the FUN step – the League Game. This is the coach’s time to observe the player’s actions and evaluate (test) his/her progress as the final stage of learning. The player TESTS himself in the technique by performing “IT” against an actual opponent. Believe me; the opponent will immediately let you know if the technique has been learned to perfection.

Players should be encouraged to try movements in a game once they feel they are ready. They should feel comfortable enough making mistakes to be willing to try. The players must balance being adequately prepared and practiced while also being brave enough to take a risk in trying this new move. By going through each step of this learning process thoroughly and with a coach’s help, the player will rightly have much more confidence in their ability.

Helpful Hint:  Do not expect to see in a game anything that was not accomplished in practice.

Back to the Next Practice and Try – Try Again  ☺

I create ‘buzz-words’ for whatever technique I am trying to teach that can be easily remembered. Ideally, these are a few short words, all starting with the same letter, that capture the most critical steps of the technique.

In this example, the buzzwords ‘Touch – Tap – Take’ break the dribble-technique into three (3) digestible steps.

All Illustrations are from my book ‘TOTALLY – FUNdamental Soccer.’

PrevPreviousMy Focus is Always a Lifelong Love of the Game.
NextMy Poor SonNext