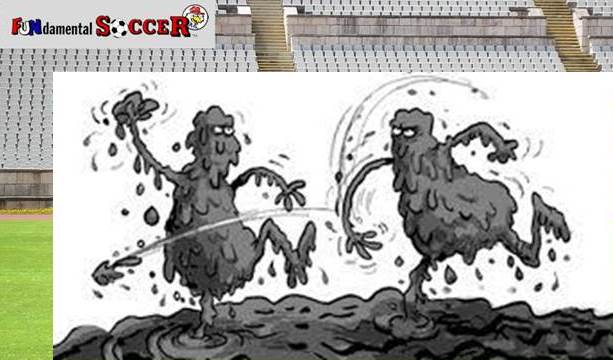 Karl: Thank you for following the progression!

Coach:  We then broke for halftime. During half-time I asked them if they liked being ducks “NO!” was their answer. I am hoping that next practice the 1+1 and 1vs.1 set-up will be laid out much quicker.

Karl: You will find that the ‘Ducks’ reminder will get them to want to lay-out the fields by themselves. That is, if they have pride in doing things on their own.

Coach:  After halftime, as we were setting up for the small-sided games, four of the girls started flinging mud at each other. I didn’t see it but it was pretty clear who was involved. I pulled the whole team together and explained that if this happens again, those involved will sit out the next game (I don’t know if I can really do that, though).

In my opinion, it is not fair to Stop and/or Punish the whole team for the actions of a few. I would suggest, that in the future, you allow the other girls to start their small sided games as you take ‘the guilty’ aside and talk to them one at a time.

Also, be very careful in coming up with consequences that ‘fit the crime’ and ‘you can apply.’ If you are not sure of being able to apply the punishment then don’t make the threat. If they get away with it once –Guess what you will face in the future?

Coach: No sooner had this happened, one little girl kneed another in the back (the recipient if the knee had also been involved in the earlier mud-tossing scene).

Coach: Perhaps needless to say, I became pretty frazzled. I made the two kids sit out and went on to the small-sided games, which really went fairly well.

Karl: We know that the ‘frazzled’ sheriff will not have these lulls in future practice where players have time to misbehave.

Coach: Because of the distractions, etc., we were running out of time and the tone was kind of “down”, I decided to let the kids play a game at the very end of practice Scrimmage, I’m sure you know it. They had fun.

Karl: A FUN ending – no more needs to be written..!

Coach:  That night, I called the parents of the kids involved in the incidents and basically let them know that throwing things and other aggressive behavior could not and would not be tolerated – I also asked for their help in curbing their kid’s behavior issues.

Karl: I think you should follow-up by having a brief meeting with the parents and their girl present. Have each girls understand what you and their parents have discussed and decided.

It would also be a good idea to sit down with the team and have them come up with consequences (team rules) should something like this occur in the future. Give the girls’ ownership of their consequences to actions that you do not approve. That way you don’t become the ‘bad guy’ but the one who carries out their rules. They will have no one to blame but themselves if they decide to step out of line.

Finally, you can always take points away from them and their tally will not allow them to be ‘leaders’ in future practices or games

I love answering your questions. Do you have a question that you'd like answered on this blog? Ask me here
PrevPreviousMissing Scoring Opportunities #1
NextI’m Stressed-Out Volunteer Coach!!!Next