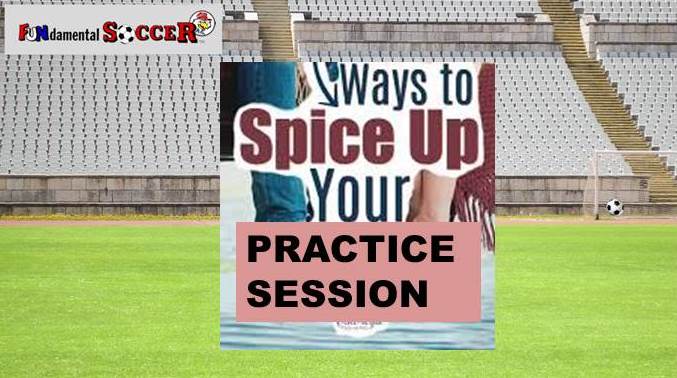 Coach Sean: “I love the ‘9-Step Practice Routine’ and have been using it for the last two seasons (12 and 13-year-old girls).  During a parent’s meeting last night, two of the parents indicated their children were getting bored going through the same routine each practice.  I change the theme each time for variety, but I agree with your program that repetition is the key to improving skills.  Any idea how to address this with the parents/children?

Koach Karl: Do you mean that children were getting bored doing the same thing every practice?  I wonder if they get bored getting up, cleaning up, eating breakfast, lunch, dinner, etc., every day (Hey, those are routines, aren’t they, and they get bored doing that? You must be kidding?  Life is boring if one looks at it that way.  But, it is exciting if one realizes that every single day is different we are a day older, we experienced something new the day before, etc., etc. Life can be exciting, but it is up to each individual to make it so 🙂

Coach Sean:  Great feedback from the parents at the meeting; I always encourage feedback regarding how the players are viewing their soccer involvement.  Especially when the feedback is in the proper setting, like a parent’s meeting, since you had more than one parent express the same sentiment, it is safe to assume that it represents a larger group.

Koach Karl: Take the opportunity to explain the philosophy behind the “9-Step Practice Routine” to the parent group.  Especially the fact that the entire routine follows nationally recognized safe and efficient training methodologies for any sport.  Explain how it progressively moves the children from a static state to a warmed-up “pace” with technical, competitive, and conditioning components.  I have found when this is explained; parents now have a better understanding of the training principles involved with the “flow/routine.”  I remember when a 13-year-old player of mine attended a higher-level soccer camp at Santa Clara University, where she lived in the dorms for a few days and trained in day-long sessions.  When she got back to our team, she said they did the same routines, training, and small-sided games.  She was amazed that there wasn’t some magic or something totally new she would be exposed to, just practice and outstanding technical correction!

So, take the parent feedback as constructive and try some of the following ideas in your future practice sessions.

Remember, variety is the “spice of life”; this is especially true in our practice routines.  The beauty of the “9-Step Practice Routine” is that the routine ensures that we plan a complete practice, but it is up to us to adjust the sessions, so we don’t build in boredom based on familiarity.

It is good that you change the theme.  This means that you recognize in-game situations to teach different fundamental techniques based on your observations.  Changing the theme based on this recognition will help alleviate some of the boredom.

Coach Sean:  I utilize the “9-Step Practice Routine” as a template for my practice sessions.  With that said, I constantly change things up especially staying cognizant of the “FUN” factor.  If a certain step of the routine brings enjoyment to the players, I’ll stay with that step a bit longer as long as the players remain technically sound.  For example, during the warm-up, I’ll introduce some fun games that mirror the session’s theme.  If the games are enjoyable, the players are properly warming up, and we are slowly getting up to “pace,” I’ll stay in Step 2 a little longer.  Remember, proper practice always involves a warm-up, technical instruction/correction, small-sided game activities at pace, and a cool down.  The “9-Step Practice Routine” provides for all of these elements.

Players can become bored constantly performing the “Serve” in Step 3.  I keep this active by adjusting ‘the Serve’ to make longer runs or even shorter runs, adjusting ‘the Serve’ to make passes easier for players if they are having difficulty with that.  Finally, I’ll make the “Serve” a bit more complicated by adding check runs before receiving the pass.  There are lots of “Serve” alterations based on the theme.

Within “Step 6,” there is much room for coach creativity.  Small-sided game activities with lots of creativity will make your practices more interesting.  This is where I really dice it up.  I constantly change things up here for variety.  Finally, around mid-season, we come back to some of the favorite small-sided games that the players are already familiar with.  These small-sided games that I’ve noted were well received; the players are happy to see them again, and things become “FUN.”

I’ll “Super-Set” small-sided games.  Quickly moving from one game to another on my command, the players hustle to the next game providing some conditioning.  After setting up two different areas, the players will stay within one activity based on a higher level of physical activity, then move to the other with a little less pace.  Players seem to enjoy these quick transitions.

Finally, in “Step-7”, the Scrimmage, creativity is the key here.  My younger players used to ask at the beginning of practice if they would play soccer today.  They were referring to “Step-7”.  They looked forward to this step.  I always made the majority of “Step-7” competitive, meaning I was not stopping play to correct technique.  This made this step very enjoyable for both the players and me.  If you sense that some boredom has been creeping into your sessions, spend more time in “Step-7” after you have covered the theme and provided proper technical correction.  This will help bring the “Spice of Life” back into your practice.

Koach Karl: Sean no more needs to be written about training the players because your summation is spot on, “I constantly change things up especially staying cognizant of the “FUN” factor!

A final suggestion, You may want to arrange for the parents to run through a couple of your sessions and then let them discuss about their children getting bored 🙂

I love answering your questions. Do you have a question that you'd like answered on this blog? Ask me here
PrevPreviousYellow Shoes
NextHow Game Reports Must Be DoneNext