In early September, there was an NCAA Division I game between two top 10 teams, one from the West coast and one from the East coast. It was an early season special. Two big-time programs went at each other, each hoping to make a statement for the 2008 college season. It was a beautiful day and the stadium was full. After watching the first half, it was clear ]the West coast team had better players. Pound-for-pound, they were more technical than the home team. The West coast team lost 3-0 (and it could have been more). They were good soccer players who played good soccer but didn’t compete. They played the game, but they did not compete in the game.

Columbus Blue Jackets head coach Ken Hitchcock told reporters in a recent interview discussing the upcoming NHL season that the Blue Jackets would make the playoffs if he could find players “who would compete and not just play.” And, there is a difference he said. “Players who play bring skill; players who compete bring everything.”

There is too much playing in American soccer and not enough competing. Playing permeates all levels of the game from U-5 to the MLS and National teams. We are confusing ability for talent. As Allen Fox, author of The Winners Mind suggests, “most people mistake speed and skill for talent. Real talent starts with energy, drive, work ethic and the will to win. Without these attributes, a player can never be great.”

In this country, we have focused so much on playing, that we have not taught our players to compete, to fight, to work hard or to have the will to win. As a soccer culture, we have always had an inferiority complex. So we emphasize playing, technical ability and skills. Our youth players play a lot of soccer, but few compete.
What happens to all the highly regarded U-17’s we had in this country? Where are they now? They are playing somewhere.

It is not always the fault of the players. Our “soccer system” (or “soccer culture”) is dysfunctional. When a player is not playing in their club, they simply change clubs. There is no thought about competing for a spot on the team, fighting for a spot, getting better to find a spot. They simply change clubs. The message to the players is striving to get better is not important–it is simply how you play and how you look.

High school-age players don’t care much about the outcome of games (whether they are playing in high school or club); however, they do care about showcasing their skills and ability for college coaches. The emphasis is on playing. How many times have you heard a parent tell their child “you played well” or “you showed well despite losing the game”?

Add to this the large number of meaningless games in youth soccer and we have a deadly combination. Young players play in meaningless high school (and hundreds of) club games. The emphasis slowly changes from the game to the individual. It also changes from playing to showing and competing is lost. By the time players move to the next level, they have not learned how to compete. Or, as Allen suggests, they do not have the drive, work ethic or will to win.

Players lose motivation and confidence when the “work/play” is no longer easy (i.e. college soccer or the next level). The rules change at the next level. The emphasis switches back to competing and hard work. The players can’t handle it; they think they are playing (and they are) but they are not competing. We need players who compete and play: players who have the will to win.

Research is very clear to show that constant praising of children’s innate (soccer skill or intellectual) ability can prevent young athletes or students from living up to their potential. On the other hand, studies also show that teaching young people to focus on effort rather than ability allows them to become high achievers and competitors in school, on the field and in life.

When confronted with failure, why do some players give up and others who are no more skilled continue to compete and learn? Stanford University’s Carol Dweck, the author of Mindset: The New Psychology of Success, suggests that the answer about why players fail lays in people’s beliefs. Although very complicated, it seems those of us who are praised for our ability or intelligence when things are easy have trouble changing gears and working hard when things get tough. Children who are taught to focus on effort and getting better (and not the outcome) learn to work hard and solve the problem. Soccer players who change clubs never learn to solve the problem(s) that others face because they never face them. Dweck says the key is not ability; it’s whether you look at ability as something inherent that needs to be demonstrated or as something that can be developed. She further suggests many young athletes who are led to believe that talent is more important than effort become “uncoachable.”

Somehow in the land of the Puritan Work Ethic, we have separated ability and effort. We are teaching our young soccer players that ability, technique and skill outweigh effort. In fact, our young players feel that having to work hard at soccer is a sign of low ability. Since college coaches are interested in ability, young players don’t work hard and don’t compete. When they get to college and things get tough, they can’t change gears and work hard. They are confused. They played “high level youth soccer” and made it to a college team playing one way. Now the coach wants the players to change and work hard. Many can’t do it.

A high level of ability will inspire confidence in our young players–for a while. As long as things are going well, the players are confident. But setbacks, adversity and failure change everything. How our young players react to setbacks depends upon their goals. If the goal is to play at the next level, focus on ability or skill (performance goals) or there will be no improvement. But if the goal is to become a better soccer player and to improve ability (learning goals), then the young player will work hard and compete and become a better player. Dweck’s 2002 study showed that praising children for intelligence (or ability) alone rather than effort actually sapped their motivation.

Culture plays a large role in shaping our beliefs. Our soccer culture perpetuates the belief that talent is the answer. Talent is defined as skill. We focus on talent; we praise those who are talented; we fight for talented players for our teams and as a result, have created a mindset that talent is the end-all in soccer. That mindset can and must be changed. The mindset that soccer ability is only the answer is a problem. We must return to an emphasis on effort, drive, determination and the will to win in addition to skill and talent.

How do we change from a “fixed mindset” to a “growth mindset” in this culture? How do we change the emphasis from relying totally on skill to relying on using the skill in addition to hard work? Dweck says one way is by telling players about those who were successful through hard work and not just skill. These stories and examples should show that real success needs a combination of ability and hard work. There are many examples of this in sports in general and soccer specifically. Cesc Fabregas of Chelsea is a good example. He has tremendous skill and soccer ability, but he also is the hardest worker on the field. That combination makes him one the best players in the English Premier League. Another example is the hard-working Claude Makalele of Real Madrid. Often overlooked as only a hard worker, his real contributions were displayed when he moved to Chelsea. After he left, Real Madrid struggled and Chelsea became one of the best teams in Europe.

Another strategy coaches can use to change mindset is praise. Instead of praising skill alone, coaches must praise effort, hard work and the will to win. Most people believe they should build up someone by telling them how brilliant and/or talented they are. Dweck’s research suggests this is misguided and a mistake. 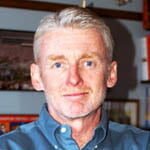 Dr. Jay Martin is a professor in Ohio Wesleyan's physical education department and served as the Battling Bishops' athletics director from 1985-2004. During his 19 years as athletics director, Ohio Wesleyan intercollegiate athletics enjoyed unprecedented success. Ohio Wesleyan won a conference-record 6 consecutive NCAC all-sports championships from 1988-94. More recently, the Battling Bishops finished in the top 25 of the NACDA Directors Cup NCAA Division III standings in 6 of the last 8 academic years under Martin's leadership. Prior to joining the Ohio Wesleyan faculty, Martin served as a 2-sport assistant at The Ohio State University, from which he received both M.A. and Ph.D. degrees. Earlier, he was director of sport at the Munich, Germany, YMCA, coaching soccer, volleyball, basketball and lacrosse; and athletics director at the American International School at Dusseldorf. Learn more about Dr. Jay Martin at Super Soccer Camp at Ohio Wesleyan University.
PrevPreviousOfficials’ v Coaches: The Age Old Story
NextWhat or who motivates our players to ‘Play or not to play’. That is the Question?Next