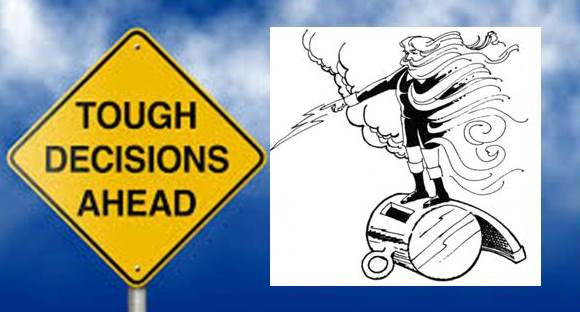 There is no promise that hard work and dedication will guarantee a world-renown or stellar career. Many officials commit the time and effort it takes to become the best they can be. Initially, all officials strive to be the best. Still, along the way, some make decisions that create unnecessary hurdles on the path to their goal.

Lack of preparation:  Some officials neglect to keep up with new changes in the Laws. They do not prepare themselves during the off-season by attending live/virtual meetings or training sessions. They wait until they are assigned a game to get up-to-date or follow the old versions of the Laws, which inevitably shows during their on-field performances. First impressions are very important, often long-lasting, and can affect assignments.

Rumors, Hearsays, or gossip: Some individuals choose to spread unsubstantiated information regarding the Laws, players, teams, coaches, or fellow officials. To them, it may seem like they are helping their cause, but it eventually will come back to haunt them. People will start questioning their motive, their integrity, and their professionalism. Their trustworthiness will be compromised. Criticizing board members of an association and/or assignors because the assignments are minimal or not up to one’s expectations is a sure way of getting fewer games.

Returning Assignments:  Assignors understand when last-minute emergencies or legitimate reasons arise and officials request to be removed from an assignment. Although finding last-minute replacements can be demanding, most assignors are more than happy to help out. Of particular concern for assignors are officials who accept multiple assignments for weekly league play or tournaments. On the day of the games, they bring up excuses to end their earlier commitments. Officials who accept assignments and routinely have last-minute reasons to be removed from games will often find themselves at the bottom of the assignor’s contact list.

Being Late to Meetings or Games.

Meetings and games have pre-established starting times. Anyone attending is expected to arrive before the scheduled start time. Showing up late to a meeting distracts the speaker and disrupts the attendees. Those who officiate organized sports have some specific duties to complete before each game. The officials are responsible for being at the site on a timely basis to meet their responsibilities before the match starts.

Officials who are chronically late to meetings/games show unprofessional behavior and a lack of respect for others. Sports officials are expected to start a match on time. When that happens, being late affects many people. Partners may have more games elsewhere, while players, coaches, and parents may have other scheduled commitments to attend. When a game ends late, many people can be affected negatively.

At some point in time, people who have partnered with or have assigned these individuals may start to look elsewhere for other officials.