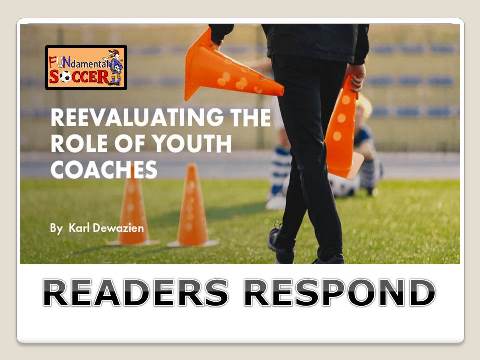 Why aren’t our youngsters playing soccer whenever and wherever possible? “A Sign of the Times,” Alcwyn Elliott.

Well,  School banned it at recess for a couple of years… So there’s that. Inga Rachelle

Why did they ban it? My son and his friends look forward to playing soccer at recess every day. Russ Converse

It was “not fair. “ Captains and teams were chosen, but usually the one team always won. Inga Rachelle

Inga, I don’t suppose anyone thought of having the weakest players as captains to choose as close as possible equally strong teams? Koach Karl

They tried lots of things… The teams kept getting picked on friendship lines, so the outcome never really changed. They even tried playing uneven teams. Inga Rachelle

Inga, What age were these kids. Koach Karl

No surprise. Kids are dropped off to adults before school for morning care, after school for “after” care, with adults in school, and at home. Want to play? Call the other parent for a supervised playdate at someone’s home. Sports? Sign them up for a camp or a rec program when they are little – run by a coach (adult). Our kids are (with some exceptions, of course) micromanaged by us adults. Patricia Lynn

Patricia, So, Alcwyn’s statement, “A Sign of the Times!” is absolutely correct? Is there nothing that WE can do about it? I was hoping/suggesting that teaching coaches to teach the children/players how to play on their own may be one step. Am I fighting windmills? Koach Karl

No, you are not fighting windmills. That’s a wonderful idea, and we (parents) need to give our kids some more freedom to hang out, do pick-up games, kick the ball around, etc.  Patricia Lynn

Research and anecdotal evidence show that parental involvement has taken the game away from kids. Kids play youth soccer to entertain their parents – rather than to have fun on their own with their own game. William Steffen

DFW is full of bus driver coaches. Sit in your seat and move when I tell you to move. There are only a couple of places/coaches that encourage playing free with creativity. We wonder why kids burn out or peak at 13. Fundamentals and the love for the game take the seat in the back of the bus. Derek Ashley Taylor

Coaches and parents need to emphasize the FUN part of the sport for youngsters, especially in non-academy programs. Otherwise, youngsters will feel that they have to participate in sport rather than to willing want to participate. Tanatsa Chigwedere

JOIN the DISCUSSION and SEND YOUR COMMENTS to: koachkarl@fundamentalsoccer.com