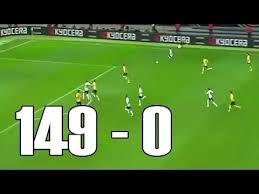 Anyone who has played soccer for any length of time has undoubtedly been on both sides of a lopsided scoreline.  It is not much fun to lose under any circumstances, but it is especially difficult when an opponent runs up the score.  Players are brought face-to-face with their shortcomings, and their confidence erodes.  Even the winning team tends to suffer a bit in a lopsided game.  Some players feel bad for friends on the losing team.  Others may feel shortchanged because they received less playing time when the coach cleared the bench, or because they did not get a chance to play as competitively as they would have liked.

Attending to players’ bruised feelings and self-esteem is a difficult but important job for losing coaches in blowout games.  They have to put aside their own feelings of frustration and find positive outcomes from an unpleasant experience.  In soccer, as in any learning situation, success is a vital element in improvement.  Yet it is a real struggle to find ways to have players perceive anything about a one-sided loss in positive terms.

What can players, coaches, and organizations do to avoid blowouts? And if one-sided contests cannot be completely eliminated, how can we minimize their negative effects?  Our purpose in writing this piece is not to deliver the definitive answer for handling blowout situations but to sample opinion, invite reflection to stimulate discussion, and perhaps generate some constructive strategies for handling games involving mismatched teams.

• Most winning coaches dislike blowouts, too, although there are some who seem to revel in running up the score on an overmatched team. Many strong teams get into bad playing habits when they face an inferior opponent, and sometimes these patterns may come back to haunt the team when it faces a more evenly matched side. Coaches on the winning side have to confront attitudinal issues as well. Just as losing teams suffer from eroded confidence and low self-esteem, a winning team may find arrogance, laziness, or poor sportsmanship among its players.

• Frequently coaches of stronger teams will impose restrictions on their own players in an effort to hold down their own score. Although this strategy may succeed in restricting scoring, the psychological effect may be every bit as insulting to the weaker team if the coach and players flout their restrictions in a condescending way. (See My Suggestions on Restrictions Below)

• League or tournament rules sometimes have the effect of compounding the blowout situation. If teams are rewarded with higher seeding or tie-breaker advantages for goals scored or goal differential, there is a disincentive to keep the score from becoming one-sided. As a result, some organizers have opted for ‘fewest goals allowed’ as the primary criterion for seeding, rather than most goals scored’.

• Ironically, many players and coaches who would describe themselves as ‘competitive’ would really rather win than compete. Coaches need to remind themselves and their players that true competition necessarily involves evenly matched opponents in contests where real uncertainty exists about who will prevail. If we find ourselves enjoying the easy wins more than the hotly contested, hard-fought losses then we may be fairly typical, but we are probably not ‘competitive.’ Too many blowout wins – especially if they are excessively glorified by coaches, parents and fans – may dilute an athlete’s taste for the legitimate struggle of real competition.

What can winning teams do to keep the score down while still playing good soccer and benefiting from the experience?

Here are some ideas of possible conditions and restrictions that coaches and players can accept to help balance the competitive situation on the field and still play hard. The list is arranged in no particular order and coaches should consider applying restrictions or rules that encourage their players to work on strengthening personal weaknesses.

• No one may score until a designated player scores.

• Specify a designated number of consecutive passes (10) before Going-to-Goal.

• Go-for-Goal only after successfully executing a combination play (i.e. wall-pass, take-over, etc.) in the offensive third of the field.

• Go-for-Goal only after successfully executing a combination play (i.e. wall-pass, give-and-go, etc.) in the defensive third of the field.

• Following restarts (including throw-ins) all players on the team including the goalkeeper must touch the ball before being allowed to Go-for-Goal.

• All players are limited/restricted to ‘one-touch-play-the-ball’, that is, they are not allowed to bring the ball under control but must immediately release (pass/shoot) with the 1st touch –no exceptions..!

• All players are limited/restricted to ‘two-touch-play-the-ball’, that is, they must 1st control the ball with the first touch and immediately release (pass/shoot) the ball with the 2nd touch –no exceptions..!

• All –or-designated players are limited/restricted to either ‘one-touch’ or ‘two-touch’ play depending on what part of the field a. defending, b. midfield, c. attacking the ball is on.

CAUTION: Moving players to unfamiliar positions often results in even more damage (scoring).  Many coaches have exchanged their front-line players with their back-line players to avoid running up the score with tragic results.  They did not realize that Back-line players (even goalkeepers) who were finally given the opportunity were willing to sacrifice personal harm to score a goal.

I love answering your questions. Do you have a question that you'd like answered on this blog? Ask me here
PrevPreviousWinning vs. Development (Part 1)
NextLife Lessons Learned from the SidelinesNext