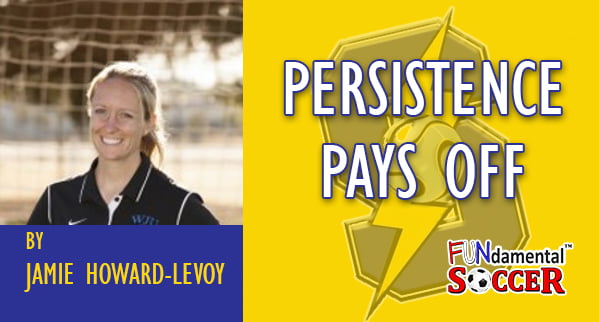 Jamie Howard-Levoy had a coaching philosophy and committed to ‘it’ with consistency.  The result, Jerry Zanelli WPSL Founder and Head Coach of the California Storm, after over 30 years, has made the decision to pass the torch of Head Coach to Jamie Howard-Levoy.

You can see that Jamie’s philosophy was established by 2006 when she submitted the following article entitled, “What They Have Taught Me…”

I thought your FUNdamental readers would like to read an update on my kids’ team!  They are a U12 girls’ team that I have been coaching. They are also considered a “B” team and I am sure you know what that means in our soccer community.

Well, they advanced to the “sweet 16” of our California Youth Soccer Association State Cup.  We had to play a guy’s team, who is on the State Instructional Staff, a young guy who also coaches at a college. He, by the way, is a very good youth coach.  We had to win in order to get to the next round!

The team we were playing was undefeated and they had not lost a game in league or tournament play.  The game was 0-0 for the full regulation time and the two 10 min. over times!!!  We went into PKs and lost.

The kids play was AMAZING.  I was soooo proud of each player.  They truly love the game and each other. I kept trying not to cry after the game because I am so impressed with them.  They are so much more than a team, they are a family.

They have taught me that it doesn’t matter if you are the best player or the worst player… what matters is how much heart, dedication, effort and positive attitude you are willing to put into something… you can accomplish anything.  Some of the girls came up to me after the game and said, “even if I make the ‘A’ team next year, I’m not going to take it.  I want to stay on this team.”

It’s incredible how much the kids want to play and work hard together and for each other when you make practice FUN and create a POSITIVE learning environment.  You know what I mean.  That’s why I am such a big fan of the FUNdamental Soccer philosophy and your ‘9-Step Practice Routine!’

You fight for what is most important toward the kids’ growth both on and off of the field.  We need more coaches to adopt your FUNdamental philosophy, so they can learn that ‘yelling and screaming’ only creates low self-esteem and hatred for the game. While the FUNdamental approach allows them to Play Their Way to Success – Can’t get any better than that!!!

Well, as you can see it did get better for Jamie!  On November 11, 2018, Jamie Howard-Levoy was named the WPSL ‘California Storm’ Head Coach.  Congratulations and I wish her much success knowing that everything for her will ‘get even better than this’ J

Dear Reader, it is now YOUR turn to have YOUR input!  Who knows, maybe your story on ‘having a coaching philosophy’, may end up helping someone improve their soccer career status…Priceless!!!

Jamie’s response to the article…

Still holds true. One of my favorite coaching courses was my National D when I got to meet you and saw how you truly cared for the kids and their development. Thank you for not only being a positive example for the kids but the hundreds of thousands of coaches you influence.

If the kids are having fun, they will want to go out and do more on their own. Yelling at kids only makes them resent the game and their coach. Jamie Howard Levoy