Editor’s note: Rosendo Gonzales was recently named CYSA District 7 Coach of the Year for 2017. These are some valuable insights he had to share.

Question: How and why did you become a youth soccer coach?

It all started when my daughter’s soccer coach stepped down and no one else volunteered so I decided to step up that was in (2011).  The main reason I decided to coach was during my playing days I suffered knee injuries and could no longer play.  The next best thing was to coach the sport and pass down the knowledge and passion I have for the game.  I want to pass on all the good things and life lessons my coaches passed on to me and see these kids grow on and off the field.

Question: What do you enjoy the most about coaching?

The thing I love about coaching is the development of players and instilling good values and sportsmanship into them.  I tell my players that soccer and life go hand in hand.  I also tell them you get out of it what you put in.  I feel satisfied when I see my kids grow and challenge themselves.  The best part is seeing these kids come together from all walks of life having fun and the bonds and lifelong friendships they make. 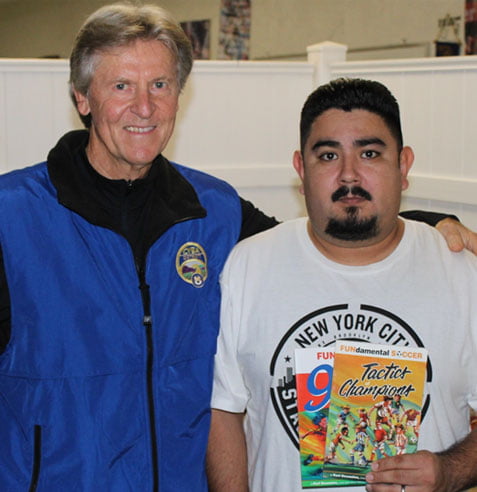 Question: What do you like the least about coaching?

The advice I would give players is whether it’s a game or practice do your best.  I don’t say try because if you try your best you have an option to choose how you play.  I want them to go out there with the mindset to do their best.  Also I remind all players to respect all coaches, teammates, opposing players and refs at all times.

The advice I would offer to experienced coaches would be to never stop learning or improving your soccer knowledge.  Never stop improving yourself as a coach by attending different coaching courses, refs courses, board meetings, and district meetings to keep up on the rules of the game.  The most important thing I think all coaches need to do more would be listen to your players and have an open line of communication with your team.

To a beginning coach I would tell them to have lots of patience.  These kids are not going to become superstars overnight.  Don’t take anything to serious but the most important thing would be is to make sure the kids are happy and having fun.  There’s no such thing as a bad player every kid has the potential to be a superstar.  It’s our job to bring out that potential in them through practice, hard work, and dedication.

First wish them good luck and have a good game and to remind them this is for the kids.  Also that with us being adults we need to be the example and set the tone for ourselves, parents and players.  No matter what the outcome of the game is remember it’s just a game so let the kids enjoy it and have fun and don’t let anyone ruin the tone you set forth.

I would advise parents to let the kids have fun and cheer for them as much as possible, but let the coach do his job and don’t coach from the sidelines it only confuses the kids.  Please don’t say anything negative to your kids even if they asked you how they did.  The best thing to do in that situation is answer back with “how do you think you did and what do you think you need to work on”.  Don’t talk about the game unless they bring it up.  When kids believe they had a good game they will want to talk about it, but when they don’t they will not want to talk which is not a bad thing.  When they decide to open up just tell them as long as they did their best all is ok and to maybe practice a little harder to improve in the areas they feel needs work because all kids no matter their age just want our love and attention.

Communication is key, if you ever have questions, concerns, complaints, or suggestions always let your coach know sooner than later.

To the Refs I would tell them to be grounded and don’t let the power go to your head.  Also no matter what is said to them keep your cool and just ref according to the rules.  Have an open line of communication with the coaches.  The most important thing I would say is that if a kids is down on the ground play should stop immediately as the kid’s health and safety is the most important thing.  We should not have to wait for the ball to go out or until a team loses possession of the ball.

The biggest change would be the commercialism of this beautiful game.  It seems there are so many so called club/comp teams out now that it takes away from the rec side of things.  The fun is lost for the kids, it’s all about winning now instead of just getting together with your friends/classmates and playing a fun game on the weekends.  There is also the fact that everyone now believes they need to have the name brand cleats and clothes in order to play.  Back in my day we wore whatever we had because as long as we were having fun no one cared about what cleats or clothes you wore you were just there to have fun.