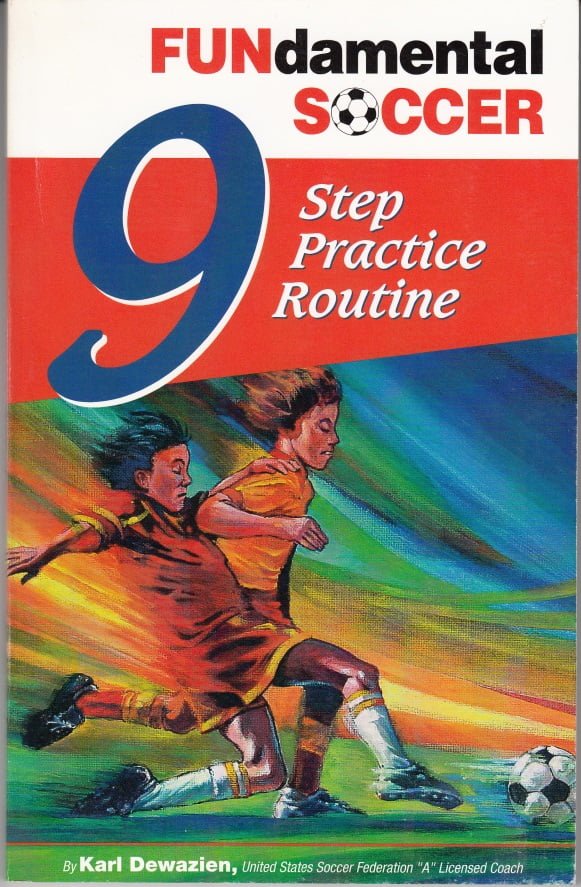 “A Practice Routine that Works”

The FUNdamental SOCCER curriculum has been and will continue to evolve according to the development level of our coaches and players. Suffice it to say that our current ‘9-Step Practice Routine’ curriculum is receiving many compliments from throughout the state, region, country, and even other countries. Some kudos for developing this modern youth training methodology should go to our innovative and creative state teaching staff. But, the major credit for our ‘9-Step Practice Routine’ development must go to the coaches who have attended, applied, and evaluated our CYSA certification courses in the past!

Their comments on the ‘Course Evaluation Sheet’ the CYSA licensed coaches have given us notice of what works and what does not work with our youth players. Dutifully, the course curriculum has, throughout the years, been adjusted and tweaked accordingly. We have experimented with and used training methodologies developed throughout the soccer world. We have discarded many trends that did not apply to our soccer environment. We have been diligent in finding and using only what was relevant to our needs.

And that brings us to a ‘new trend’ which seems to be developing in the intellectual branches of the youth soccer community. ‘Course Evaluations Sheets’ that we have received recently have followed the same vein of thought and need to be addressed in a public forum. Here is a sample of what they say:

“I waited to fill this out until I actually put what I learned into action with my team. While the clinic was well done, I’ve found that many suggested exercises, activities, and techniques require a greater attention span than my U-10 team has. It would have been helpful to learn more age-appropriate games/activities to convey the techniques to my team.

In retrospect, that would have been a better use of my time than learning more advanced techniques like using the head, body, and legs to stop/block carry and pass the ball. This is not a reflection on the instructor but instead on the focus of the class. Perhaps there should be different clinics for different aged teams?” Coach Arnold.

The CYSA instructional staff has covered its position on this question through articles, lectures, Q & A sessions, etc. And now we have found another source that echoed our feelings on this subject. In a current issue of ‘Soccer America’ in its College Section, the following comments were made about age-appropriate training:

“The foundation for all of this was laid way back when Wagner (Aly Wagner picked No. 1 in the ‘03 WUSA Draft) was playing for Central Valley Mercury, the San Jose club team that won three national titles and produced WUSA players Danielle Slaton, Anna Kraus and Brooke O’Hanley and several other Division I college standouts. Philippe Blin, then an assistant to Smith (Jerry Smith, NCAA Division 1 National Champion coach) who coached Mercury with Vicky Wagner, Aly’s mom, took an unorthodox approach to teach the game to young girls.

He took the same training sessions with the university team and applied them to the youth team, Smith says. “The thing we learned was the whole idea of age-specific drills and tactics and technique was a bunch of baloney.” Young players were able to do the exact same things as university players do, only more slowly. Their ability to comprehend or learn the skills was no different. In some cases, they were better able to learn, like teaching a young child a foreign language.”

Strange how easily we can get (our younger players) to quickly learn and play such diversified non-soccer-related games as Sharks & Minnows; Cats & Mice; Simon Says, King of Dribblers, etc. It seems logical that we should be able to teach them at least to play the simple 1 vs. 1 game that consist of:
-You have ball possession –Attack their goal and score.
-They have ball possession – Defend your goal and don’t let them score.
-Finally, you can only move the ball with all parts of the body except the intentional use of the hands.

The CYSA staff instructors realize that “It is our job to convince you, the youth coach, that our ‘9-Step Practice Routine’ will develop soccer players. And since your duty is to improve youth soccer players, you will find the ‘Nine Steps’ invaluable in accomplishing this task.

We (staff) are not in the business of providing age-appropriate games/activities. We(staff) are soccer coaches who would be thrilled to have our children ‘love to play soccer rather than other games and activities!”